This page includes an article on the involvement of the AAUW in the women’s suffrage movement, and a section at the bottom with links to biographies of notable AAUW members who were suffragists.

Women’s Equality Day, August 26, marks the anniversary of the 19th Amendment, which granted women the right to vote. It may come as a surprise to you that the road to women’s suffrage was not an easily travelled one for AAUW, then called the Association of Collegiate Alumnae (ACA). On the contrary, it was filled with lots of delays and roadblocks. It wasn’t until 1914 that ACA leaders and members even began to discuss the issue. Only then did they support a watered-down resolution that simply called for branches to “study the issue.”

Why, you might ask, would a group of such brave, trailblazing, educated women oppose women’s suffrage? The answer is that most ACA members supported suffrage in principle but remained fearful of discussing it because it was considered outside the stated purpose of the association. If they became involved in this “external” issue, what else would follow? Would they then become stretched too thin and not be able to accomplish their original mission?

The fear of losing membership loomed large in this decision. Remember that in the 1910s, the pool of potential members, women with college degrees, was still rather small. So with limited womanpower at their disposal, early leaders wanted to conserve their membership and dedicate their focus on the original purpose: “for practical education work, for collection and publication of statistical and other information concerning education, and in general for the maintenance of high standards of education.” This first generation of college-educated women still faced insurmountable barriers to their full participation in the educational world; there was much work to be done without tackling the issue of suffrage. 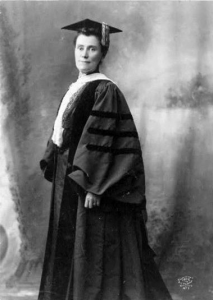 Despite these fears, ACA members were also acutely aware of their responsibilities, as college educated women, to create a better society. The importance of their civic responsibility is a consistent message in records from the archives. But how could women carry this out without being able to vote? In 1914, Mary Woolley, president of Mount Holyoke College and an ACA member, wrote about this in an article titled “Civic Responsibility of the College Woman.”

“It is impossible to consider the question of civic responsibility,” Woolley wrote, “without reference to the question of woman suffrage.” (Woolley would later become AAUW president, in 1927.)

The following year, 1915, the association met in San Francisco. Now that the branches had studied the issue for a year, the organization deemed it safe to cast its ballots for or against the issue. The suffrage resolution passed by a vote of 247 to 19.  It read as follows:

“Recognizing that, under our government, education in both its academic and social aspects is controlled by the electors, be it Resolved that we, as a body of college women dedicated to the promotion of education and desirous of furthering our ability for usefulness, favor suffrage for women.”

Despite the association’s struggle to fully support women’s suffrage, it’s important to note the many individual ACA members who were suffragists: women like Anna Kelton Wiley, a member of the Washington, D.C., branch who was jailed at Occoquan Workhouse for picketing the White House, and Maud Wood Park, who organized the College Equal Suffrage League to gather support from what critics called an apathetic younger generation. Along with our ACA founders, leaders, and members, they are just a few of the brave women we honor on Women’s Equality Day.

Links to Biographies of Other Notable AAUW Members