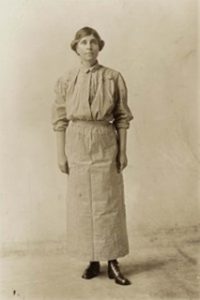 Abby Scott Baker, of Washington, D.C., came from a multi-generational military family. She was one of Alice Paul’s earliest associates and helped Paul and Burns plan their first major event–the March 3, 1913, national suffrage parade on the eve of Woodrow Wilson’s inauguration. She served as treasurer of the Congressional Union for Woman Suffrage (CU) in 1914 and quickly became one of the most effective lobbyists for both the CU and its successor, the National Woman’s Party (NWP).

Baker traveled the country as part of the CU’s “Suffrage Special” train tour of western states in April-May 1916. The envoys set off with fanfare from Union Station in Washington, D.C., and Baker was in charge of handling the press for the tour. The support that she helped raise from women in states that had already granted women’s suffrage culminated in a June 1916 meeting in Chicago to form what was at first called the Woman’s Party of Western Voters, or Woman’s Party, for short (later, the NWP). When the NWP was more formally organized in relation to the CU in March 1917, Baker was elected to the NWP executive committee and served as its press chairman (1917-18) and political chairman (1917; 1919-21).

Baker was among the first demonstrators to picket the White House; she was arrested in September 1917 and sentenced to 60 days in the Occoquan Workhouse. In February-March 1919, she served as publicity manager and speaker for the “Prison Special,” a three-week lecture tour by NWP activists who spoke to packed audiences about their jail experiences in an effort to generate support for the suffrage cause. Baker was an important lobbyist during the key years (1917-20) that the NWP pressured for passage of what became the 19th Amendment to the U.S. Constitution. Known as the diplomat of the NWP, Baker was a significant presence in the organization’s ongoing tactic of asserting personal influence upon leading authorities in public and private life. When the NWP’s patriotism was challenged, she reminded critics that her three sons were fighting in World War I. In the midst of the ratification process for the 19th Amendment,

Baker was among the NWP members who attended the Democratic National Convention of 1920 in San Francisco and successfully brokered a pro-suffrage plank as part of the party platform. She subsequently lobbied the presidential candidates from both political parties, James M. Cox and Warren G. Harding, to support the women’s rights cause.After suffrage was achieved, Baker became a member of the NWP’s Committee on International Relations and the Women’s Consultative Committee of the League of Nations. She also represented the NWP at the League’s 1935 international conferences in Geneva where the issue of equal rights was discussed.