By Edith P. Mayo, Curator Emerita of the Smithsonian Museum of American History 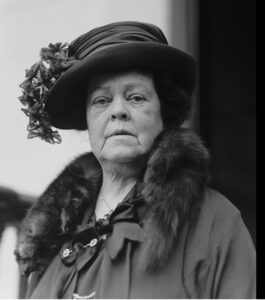 Alva Belmont, often referred to as Mrs. O.H. P. Belmont (1853-1933), was the most important financier of the militant wing of the suffrage movement in the United States.  She largely financed the Congressional Union (while still part of the National American Woman Suffrage Association and afterward as a separate organization), and later the National Woman’s Party, founded by Alice Paul and Lucy Burns.  She married twice, first to William Vanderbilt, grandson of Cornelius Vanderbilt. Her second marriage was to financier Oliver Hazard Perry Belmont.  Both were millionaires and prominent members of New York’s socially prominent families.  Her marriage to Vanderbilt endowed her with a personal fortune, as well as giving her Marble House, the Vanderbilt “summer mansion” in Newport, Rhode Island.  Marble House became the site of suffrage conventions and fundraising parties for the “Votes for Women” cause.

Born in Mobile, Alabama, in 1853, she was energetic, intelligent, and willful.  Her millionaire status provided her with the power to carry out her ambitions, both personal and political—in the labor and suffrage causes.  She was educated in France, where her family had located during the Civil War. After the War, the family returned to New York City.  In 1875, Alva married William Vanderbilt, Cornelius Vanderbilt’s grandson, and had three children. During her time as Mrs. Vanderbilt, Alva held a series of social extravaganzas, establishing herself as one of the queens of New York society.  She shocked America when, in 1895, she divorced her unfaithful husband, at a time when divorce was rare among the social elite.  From her divorce on the grounds of adultery, she received a large settlement of approximately $10 million dollars!

She was married for a second time in 1896 to Oliver Hazard Perry Belmont, one of her ex-husband’s old friends. After his sudden death in 1908, she devoted her considerable wealth and energies to the suffrage cause, after hearing a lecture by Ida Husted Harper, one of the biographers of Susan B. Anthony. She also financed actions by the labor movement, underwriting many of its more prominent demonstrations.  She proved masterful at fundraising and directing her socialite and political connections to the cause of “Votes for Women.”  In 1909, Belmont founded the Political Equality League bringing together the labor and suffrage movements.  Her powerful social and monetary position made her a central figure in the suffrage movement.  She joined the National American Woman Suffrage Association in the same year and underwrote the costs of rent for the Association’s headquarters in New York City and, later, the expenses of the Congressional Union and the National Woman’s Party.  She merged her Political Equality League with the Congressional Union and served as a member of the Executive Board of both the Congressional Union and the National Woman’s Party (1914-1920).

She was one of the founders of the National Woman’s Party.  At their founding convention in Chicago in 1916, “conventioneers . . . mingled with Belmont (wearing diamonds galore) . . . at the welcoming reception held in the modern Blackstone Hotel.” 1 (Jill Zahniser and Amelia Fry,   Claiming Power, p. 240).

During the period when the Congressional Union founded by Alice Paul and Lucy Burns remained a part of NAWSA, Belmont supported increasing the militancy of the suffrage movement.  She brought her experience with the labor movement to the suffrage cause. In 1917, Belmont chaired the mass meeting of the National Woman’s Party at Washington, D. C’s Belasco Theater to honor suffragists who were arrested for picketing the White House and sent to the Occoquan Workhouse (prison) where they endured the November, 1917 “Night of Terror.” Those who had been imprisoned were awarded silver “Jailed for Freedom” pins for their daring and bravery.

In 1921, she became president of the National Woman’s Party.  She purchased a large brick historic home on Capitol Hill, located conveniently near the Capitol for lobbying purposes, and donated it to the National Woman’s Party as their headquarters.  The house, which is used today as an historic site dedicated to women’s equality, is known as the Belmont-Paul Woman’s Equality National Monument and is administered by the National Park Service.  The site is open to the public.