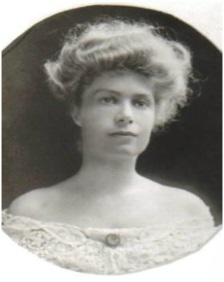 Born the second of six children to Quakers William Alexander Himes and Catherine Wirt Gitt, Amelia “Mimi” Eichelberger Himes was an outgoing, intelligent young woman who grew up in a comfortable home in New Oxford, Pennsylvania. At a young age, she understood the Quaker theme of “Out of the Darkness and Into the Light” – meaning the Light of God is to shine in all of us. With a stern but compassionate upbringing, Mimi came to care for those less fortunate than herself and had the intelligence and tenacity to do something about it!

Her years at Swarthmore – where she was a classmate of Alice Paul – provided her with the opportunity to fully develop skills of rhetoric, public speaking, and the ability to command an audience with her musical talents. She pledged the Kappa Kappa Gamma sorority, graduating in 1902. At Swarthmore she also met her future husband Robert Hunt Walker. Together they raised three children, Talbott, Katherine “Kitty”, and Cooper.

Robert and Mimi raised their family at the home of his parents, called Drumquhazel, near Towson, Maryland. The home and land were conducive to entertaining musicians, actors and other Suffragist friends. Baltimore Suffragist Edith Hooker was a close friend who also served time at the Occoquan Workhouse with her for “obstructing traffic” while picketing in front of the White House in 1917 –on Bastille Day, July 14.

Mimi’s passion for the Feminist Movement lasted until her death in 1974 at 94. She spoke before the United States Congress on numerous occasions – calling for their support of the Equal Rights Amendment. Earlier, she marched in protest including the great Suffragist Washington DC pageants and parades of 1913 and was active in the National Woman’s Party. She hung banners from the second floor windows of Drumquhazel that read, “Equal Rights”, “Votes for Women” and “Mr. President, How Long Must Woman Wait for Liberty?” Her imprisonment at the Occoquan Workhouse, she carried with pride –wearing the iconic “Jailed for Freedom” pin on her lapel for years, given to around 100 women who had endured imprisonment at the Occoquan Workhouse for picketing in front of the White House. When the DC government finally admitted some years later that the Suffragists had been illegally incarcerated, Mimi wrote to a sister picket of the thrill she felt “at being forever removed from the criminal class.”

One of her best preserved articles promoting the Equal Rights Amendment, “Equal Right?,” appeared in “The Key”, the official magazine of Kappa Kappa Gamma. In it Mimi writes, “All the confusion that we now have of different laws for men and women, of male workers and female workers, will be adjusted by the state legislatures to apply to human beings, to workers according to the hazards of the job and not the sex of the worker.” Mimi took her passion to local politics as well and ran unsuccessfully for the Maryland State Legislature. Mimi continued to give speeches in the Towson, Maryland area and was remembered as frank and outspoken. In the 1940’s she took up residence in Winter Park, Florida and occasion ally gave lectures on Equal Rights for Women at Rollins College. Daring, adventurous, and charming even at the age of 80 she enjoyed a trip around the world and rode camels in Egypt – continuing on to visit Ceylon and Thailand.

A number of Mimi’s grandchildren have visited the Workhouse Arts Center’s Prison Museum and the Suffragist section there. Three of them have seen Mimi reenacted by historic re-enactor, Lynne Garvey-Hodge and they are thrilled that the memory of Mimi has been resurrected to encourage the education of so many who know so little about the early 20th century Suffragist movement. . Oh, and you may ask where is Mimi’s beloved “Jailed for Freedom” pin? Generous soul that she was, she proudly donated it to the Smithsonian Museum in 1959, so that the memory of those who fought so valiantly for Equal Rights for Women in getting the 19th Amendment passed, would never, ever be forgotten – or ever have to say, again, “Mr. President, How Long Must Women Wait for Liberty?”