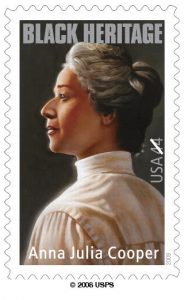 Anna Julia Cooper
Photo: 2009 stamp of the US Postal Service

Anna Julia Cooper was a prominent African American scholar and a strong supporter of suffrage through her teaching, writings and speeches. She was born to house slave Hannah Stanley Haywood in Raleigh, NC. She studied on a scholarship and taught at Saint Augustine’s Normal School and Collegiate Institute in Raleigh. There she met George A. C. Cooper whom she later married. After his death after two years of marriage, she earned a B.A. and M.A. from Oberlin College, studied at Columbia University, and at 67 years of age received her Ph.D. from the Sorbonne in Paris. She was an educator most of her life, instructing in Latin and Mathematics at the predecessor of Dunbar High School (M Street High School) in Washington D.C. She was the author of A Voice from the South, cited as the first work of an African-American feminist. It was published in 1892, and later by Oxford University Press.

Midge Wilson & Kathy Russell wrote in Divided Sisters: Bridging the Gap Between Black and White Women (1996),”Among Black women who were staunch suffragists was Anna Julia Cooper, best known for her statement: ‘Only the BLACK WOMAN can say when and where I enter in the quiet undisputed dignity of my womanhood, without violence or special patronage; then and there the whole Negro race enters with me.’ Cooper was particularly effective in emphasizing to Black women that they required the ballot to counter the belief that ‘Black men’s’ experiences and needs were the same as theirs.”(1)

One of her famous speeches was delivered at the World’s Congress of Representative Women in Chicago in May 1898. Cooper described with emotion the plight of African American women in slavery and their progress through education since. The last part of that famous speech follows:

“Now, I think if I could crystallize the sentiment of my constituency, and deliver it as a message to this congress of women, it would be something like this: Let woman’s claim be as broad in the concrete as in the abstract. We take our stand on the solidarity of humanity, the oneness of life, and the unnaturalness and injustice of all special favoritisms, whether of sex, race, country, or condition. If one link of the chain be broken, the chain is broken. A bridge is no stronger than its weakest part, and a cause is not worthier [th]an its weakest element. Least of all can woman’s cause afford to decry the weak. We want, then, as toilers for the universal triumph of justice and human rights, to go to our homes from this Congress, demanding an entrance not through a gateway for ourselves, our race, our sex, or our sect, but a grand highway for humanity. The colored woman feels that woman’s cause is one and universal; and that not till the image of God, whether in parian or ebony, is sacred and inviolable; not till race, color, sex, and condition are seen as the accidents, and not the substance of life; not till the universal title of humanity to life, liberty, and the pursuit of happiness is conceded to be inalienable to all; not till then is woman’s lesson taught and woman’s cause won—not the white woman’s, nor the black woman’s, not the red woman’s, but the cause of every man and of every woman who has writhed silently under a mighty wrong. Woman’s wrongs are thus indissolubly linked with undefended woe, and the acquirement of her ‘rights’ will mean the final triumph of all right over might, the supremacy of the moral forces of reason, and justice, and love in the government of the nations of earth.”(2)

Cooper lived to 105 years of age. In 2009, the US Postal Service issued a stamp in her honor, also in 2009 the private tuition-free Anna Julia Cooper Episcopal School was founded in historic Church Hill area in Richmond Virginia.