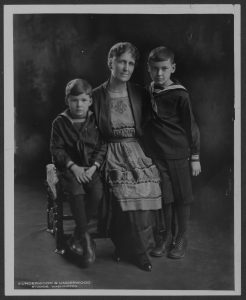 Mrs. H. W. Wiley [Anna Kelton Wiley] and John and Harvey [Wiley]. Chairman of the Memorial Committee at the services in honor of Dean Emma Gillett at the United States Capitol, Sunday, May 15 [1927]. Library of Congress.

Many heroines from the suffragist movement made the right for women to vote for the first time in 1920 possible after ratification of the 19th Amendment for Equal Rights. This writing relates the story of only one of those women, Anna Kelton Wiley.

Born March 8, 1877 in Oakland, California to John and Josephine Kelton, Anna was one of five children listed on the 1880 federal census of San Francisco, California. Two more children were born after Anna. The 1900 federal census gives the information that eight children were born to Josephine and at that time seven were living. John Kelton, shown on the 1880 census as a soldier, lived with his family in barracks in San Francisco. The family must have had some means as Josephine’s mother and four servants were living in their household.

By the 1900 census John had passed away and widow Josephine Kelton headed the family in Washington, D.C. with six of her children residing with her (one of whom was Anna), both of Josephine’s parents and a housekeeper. In the meantime Anna had graduated from George Washington University, Washington, D.C. in 1892 and worked as a government clerk. In1910 she worked as a library clerk, still living in her mother’s household.

On February 27, 1911 Anna Kelton and Harvey W. Wiley, a confirmed bachelor, were united in marriage in Washington, D. C. Anna was thirty-three and Harvey was sixty-six. It was a first marriage for both of them. Harvey, a noted chemist best known for his leadership in the passage of the landmark Pure Food and Drug Act of 1906, was nicknamed the “Father of the Pure Food and Drug Act”. They were the parents of two sons, Harvey Jr. and John.

Theirs is a great love story. While working in a laboratory at Harvard University in 1873 where Harvey completed his B.S. degree, he wrote a poem “Chemico Metrical Madrigal.” In the poem he paid tribute to a blond, blue-eyed ideal of feminine beauty in images drawn from chemistry and in four-line rhyming stanzas. His vision of the woman he was looking for was so compelling that he waited for her another twenty-five years. He first saw Anna Kelton in 1898.

Suffrage women picketed the White House in 1917. That summer President Woodrow Wilson’s government began arresting members of the National Woman’s party for demonstrating for the right to vote. Over 100 were arrested and jailed between 1917 and 1919. Looking like the perfect lady dressed up in white with hat, Anna Wiley was photographed holding on to a sign which read, “MR. PRESIDENT – HOW LONG MUST WOMEN WAIT FOR LIBERTY.” In a 1918 Good Housekeeping article they explained why they picketed the White House as, “Finding our amendment blocked at every turn on the road [and] refused further audiences by the President, we determined to lay the responsibility for the indifference of Congress to our amendment where it belonged, upon the leader of the party in power.”

Anna Kelton Wiley, a member of the National Woman’s Party (NWP)’s national advisory council, was active in lobbying, political work, and picketing for NWP. She spent 5 days in district jail when she was arrested and sentenced to 15 days on November 10, 1917. Wiley appealed her case and it was later upheld by a higher court. She could have been pardoned, but chose to go to jail so Elizabeth McShane would not have to go alone. Later Wiley said that the “jailing was the highlight of my life.”

After Harvey Wiley’s long government career he resigned a year after his marriage and took over the laboratories of Good Housekeeping magazine where he worked for 18 years. He died at his home in Washington, D.C. on June 30, 1930, the 24th anniversary of the signing of the Pure Food and Drug law. He was buried in Arlington National Cemetery. Wiley left quite a legacy and has been honored in a number of ways since his passing.

Anna Kelton Wiley continued her activity in various Washington organizations after Harvey’s death. She served as Chairman of the NWP (1930-1932, 1940-1942) and was editor (1940-1945) of its periodical, Equal Rights. She continued the fight both she and her husband were engaged in for improved consumer health and safety in relation to food, drug and beverage products on the market. For fifty-five years she was active in various Washington organizations, belonging to more than 40 of them. She used her knowledge of and interest in politics and lobbied for legislation on their behalf.

Anna Kelton Wiley died in 1964 and is buried in Arlington Cemetery next to her husband.