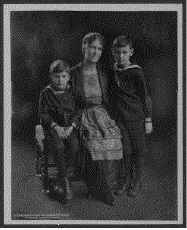 Anna Kelton Wiley was born in Oakland, California in 1877. She graduated from George Washington University, Washington, DC, in 1897 and worked in various government offices. She married Dr. Harvey W. Wiley, Chief of the Bureau of Chemistry, in 1911; they had two children, Harvey, Jr. and John P.

Anna Wiley was active in various Washington organizations for fifty-five years. As a suffragist she was arrested for picketing the White House on November 10, 1917, and sentenced to 15 days in District Jail; she appealed her case and it was later upheld by a higher court. She served as Chairman of the National Woman’s Party (1930-1932, 1940-1942) as well as editor (1940-1945) of its periodical, Equal Rights. She belonged to over forty organizations, as diverse as the Daughters of the American Revolution and the Consumers’ League. Using her knowledge of and interest in politics, she lobbied for legislation on behalf of many of these organizations. Anna Kelton Wiley and Rheta Childe Dorr led a delegation of women to a meeting with President Wilson. Mr. Wilson again said he supported leaving suffrage to states and became annoyed when the women pressed him about the possibility of a Constitutional Amendment. The exchange reportedly fueled the growing view that women in the Congressional Union were “hecklers” and “women howlers.”