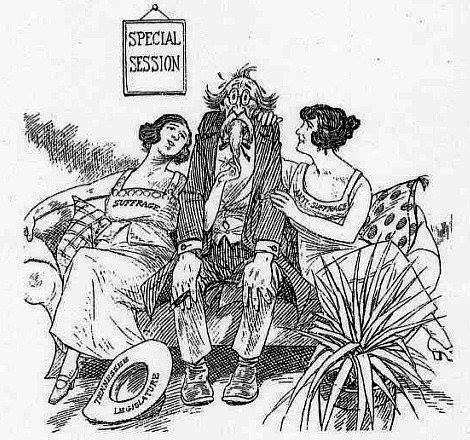 PHOTO: A recent cartoon showing a Tennessee legislator being courted by a suffragist and an anti-suffragist.

August 10, 1920: In the wake of a stunning setback for our cause earlier today, the process of ratifying – or perhaps now rejecting – the Susan B. Anthony (woman suffrage) Amendment formally got underway in the Tennessee Legislature, where resolutions to ratify were introduced in the Senate and House.

But as an example of how fragile suffrage pledges can be, the Speaker of the House and a number of other legislators have suddenly switched from supporters of ratification to opponents. The Speaker had been a strong advocate of suffrage, and was expected to personally introduce the ratification resolution in the House. In addition to the fact that he may now use his position to slow the progress of the resolution, there is great concern that Speaker Walker’s defection may encourage even more members to switch sides. Already the National Woman’s Party, whose careful and conservative vote estimates seem the most trustworthy, has reluctantly announced: “The majority for ratification of the suffrage amendment in the Tennessee Legislature has disappeared.”

Many of those who had pledged support while still back home have apparently changed sides since arriving in Nashville, though without saying why. But regardless of what influences may be in play, Alice Paul has, as always, placed responsibility at the top:

“The change in the Tennessee situation can be traced to one thing only – the failure of [Democratic Presidential nominee] Governor Cox, and Governor Roberts of Tennessee, to put sufficient force behind their public pleas for ratification to insure favorable action. Defeat of the amendment in Tennessee would be a deliberate defeat. Delay, making it more difficult for women to secure another State, would be a deliberate delay.”

As President Wilson can personally attest, the National Woman’s Party can make things quite uncomfortable for those who fail to display sufficient zeal for the cause. Since no one in office or running for office would want to be the target of picketing, or even more militant types of protest, such as having their speeches ceremonially burned in public, it’s hoped that Alice Paul’s words will have an immediate effect, and re-energize the efforts of the Presidential nominees of both parties, and more importantly, Tennessee Governor Albert Roberts.

The Tennessee Legislature’s special session will be a short one, so time is running out even as it begins. If Tennessee doesn’t ratify, it’s highly unlikely that another State can be found to become the 36th and final one needed to finish the process of ratification before the November elections. That means women in only 15 States and the Territory of Alaska would have full voting rights, though women can vote for President in 12 more. But that still leaves 21 other non-equal-suffrage States unless the Anthony Amendment passes, and does so early enough for women in States where they have no voting rights at all to meet registration deadlines.

But if votes can suddenly shift one way, they can shift another, so the battle is far from over. Our cause has recovered from far bigger setbacks than this. Just five years ago this Fall, the (male) voters of New Jersey, New York, Massachusetts and Pennsylvania rejected suffrage referenda despite unprecedented, all-out campaigns, and the future of the suffrage movement looked exceedingly bleak. But now a Constitutional ban on sex discrimination at every polling place in the U.S. is so close that it requires only the votes of 17 of 33 Tennessee State Senators and 50 of 99 House members – though winning those endorsements will require the usual uphill fight.

Fortunately, not all of today’s news is gloomy. Two ailing legislators who favor suffrage, State Senator S.C. Collins and State Representative R.I. Dowlen, arrived tonight, and their extraordinary efforts to get here are greatly appreciated. Also, over a hundred representatives from several suffrage organizations met with leading Democratic suffrage proponents in the State Senate, and after the meeting, the Democrats began trying to arrange a meeting tomorrow with pro-suffrage Republicans to plan a joint strategy for ratifying the proposed 19th Amendment in the Senate. Democratic Presidential nominee (and Ohio Governor) James Cox has sent a telegram to Charl Ormond Williams, head of the Women’s General Ratification Committee saying:

“I sincerely hope the Tennessee Legislature may ratify the suffrage amendment at once. It is not only a matter of justice and right, but I believe one of utmost benefit to the Democratic Party, because the great issue upon which the campaign will be decided will find its response to the Democratic appeal in the hearts of American women.”

The “great issue,” of course, refers to U.S. entry into the League of Nations, which Democrats – especially President Wilson – have strongly supported, and Republicans have thus far blocked. Though there’s no concrete proof, it has been speculated by some that after being the strongest supporters of suffrage, Republicans are now becoming reluctant to enfranchise millions of women voters before the November elections out of fear that Cox might be right, and women will vote overwhelmingly Democratic to support U.S. participation in the League.

“When I came to Tennessee three weeks ago, I announced that a majority of both Senate and House were pledged to vote for ratification. No development has overturned that majority. I have absolute confidence in the integrity of the legislators of Tennessee and believe they will stand by their pledges.”