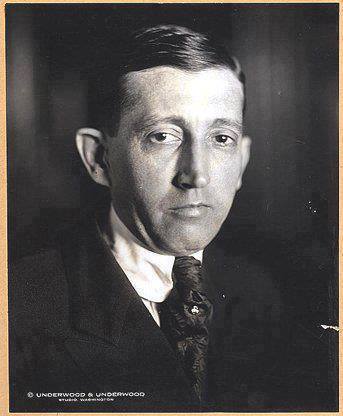 PHOTO: Will Hays, head of the Republican National Committee.

August 11, 1920: A key, and quite encouraging victory has occurred, as a motion to postpone a vote by the Tennessee Legislature on ratifying the Susan B. Anthony (woman suffrage) Amendment until August 24th has been tabled! Though it’s still highly questionable whether there are enough votes in both houses to actually ratify the amendment, and give it the 36th and final State approval it needs to become part of the U.S. Constitution, there will be a vote soon, so the anxiety that everyone is feeling won’t be greatly increased or unnecessarily extended.

Plans now are to have a joint hearing by the House and Senate Committees on Constitutional Conventions and Amendments tomorrow night, then send the ratification resolution on to the full House and Senate the next day. If approved quickly, Friday the 13th could turn out to be a very unlucky day for our opponents.

Had today’s motion to postpone passed, there would have been a number of public meetings around the State on the 21st, and no vote on ratification until three days after that. But after a vigorous debate, punctuated with frequent bursts of applause by our supporters who were able to get seats in the galleries, the House voted 50 to 37 to table the measure that would have delayed the vote. Since 50 votes are enough to pass the ratification resolution itself in the 99-member House, that number is very significant. The question now is how many of those who opposed postponement favor ratification, and how many are opponents who simply want to cast a quick vote of rejection and go home, with the main business of this special session concluded.

Another attempt to block ratification is being made by Representative Story. His resolution declares that since women in Tennessee were granted Presidential and municipal suffrage last year, the Anthony Amendment would give them no new privileges, and since there is (allegedly) some doubt about whether the State can legally ratify, due to a clause in its constitution, no action should be taken at this time. His resolution has not yet been voted upon, but based on today’s other vote, it is equally unlikely to pass.

One of the more interesting resolutions introduced today was by anti-suffragist State Senator Mc Farland. It would ask the large number of lobbyists here from around the country “…. to please go away and leave us alone. We would much prefer your room to your company. The men of Tennessee, noted for their integrity and chivalry, are desirous of doing in this case for their women as they always have in the past, and we feel that we are fully capable and competent to fight our own fights without interference from any outside people whatsoever.”

Though wrong on suffrage, Mc Farland is certainly right about Nashville being quite crowded with those here to lobby for – and against – our cause. But despite his displeasure, even more lobbyists will be coming as the showdown approaches.

All the leading Republicans are now urging ratification on their colleagues, and in today’s first vote regarding ratification, 23 out of 28 House Republicans voted to table the postponement measure. J. Will Taylor, who represents Tennessee’s Second District in Congress, assured the National Woman’s Party that he expected the already overwhelming Republican majority in support of the suffrage resolution to increase by the time of the vote.

Will Hays, head of the Republican National Committee, was today’s strongest advocate for suffrage among national politicians. With the apparent approval of Republican Presidential nominee Senator Warren G. Harding, he sent a message to 3 State Senators and 11 House members that left no doubt about how the Republican Party wants them to vote:

“My deep interest in the ratification of the suffrage amendment induces me to presume to communicate again to you the resolutions passed by the National Committee in February 1918, January 1919, and December 1919, and by the Executive Committee in Columbus, Ohio, last month, all most earnestly urging the Republican Legislatures to ratify. Present unrest is in large measure due to the fact that so many vital questions are clamoring for simultaneous decision. Any one of those questions, definitely settled, is a big contribution toward national stability.

“The suffrage question is one that can be settled immediately by the Tennessee Legislature. It is really not a party question. Its pendency merely makes it more difficult for the public mind to focus upon the issues of a Presidential campaign. If we relieve the American woman from the necessity of claiming her constitutional rights, and her sister from the fancied necessity of opposing this claim, we will liberate a body of public opinion upon the campaign and its issues which will prove itself to be one of our greatest national assets.

“Democracy in the United States is really nothing but a sham unless Election Day gives all Americans the chance to express their political opinion effectively. To hold American women bound by the result of an election, to train them in schools to think for themselves as well as a man, to accord them freedom of utterance as a constitutional right, and then attempt to deny them the opportunity to stand up and be counted on Election Day is a governmental blunder of the first magnitude.

“Both parties recognize that the effects of the approaching Presidential election will influence our national life for at least fifty years. There never was an election at which it was more important for opinion and sentiment to express themselves. The action of Congress and of thirty-five legislatures has given to millions of American women the right to hope confidently for this great opportunity. Deny them the opportunity merely because the necessary governmental machinery does not function, and you produce the unhealthy national situation which always exists when masses of citizens have burning convictions to express and no effective outlet for their expressions.

“I refrain from advancing the usual argument in behalf of suffrage. I leave entirely out of consideration the partisan advantage or disadvantage which ratification might entail. I urge ratification, first, in the hope of thereby clearing the political atmosphere; second, in the belief that the suppression of effective opinion works harm to the whole body politic; and finally, in the conviction that we owe immediate action as a measure of simple justice to American women. I trust you will help in this.”

As to the Democrats, recent complaints by not only Alice Paul of the National Woman’s Party, but by members of other suffrage groups as well, that Governor Albert Roberts was not getting as personally involved as he should in the drive for ratification diminished somewhat today. Roberts was seen on the floor of the House this morning lobbying his fellow party members, who constitute an overwhelming majority in both the House and Senate. But yesterday’s defection of the Democratic Speaker of the House, plus a number of others, is a major setback that still needs to be overcome as the vote in Tennessee becomes even more critical due to a development elsewhere.

Tennessee is now the one and only realistic hope of ratifying the Anthony Amendment before the nationwide elections on November 2nd, because 63 members of the 120-member lower house of the North Carolina Legislature announced today that they will not allow their State to ratify:

“We, the undersigned members of the General Assembly of North Carolina, constituting the majority of said body, send greetings to the General Assembly of Tennessee and assure you that we will not ratify the Susan B. Anthony Amendment interfering with the sovereignty of Tennessee and other States of the Union. We most respectfully request that this measure not be forced upon the people of North Carolina.”

There’s clearly a tough fight ahead, but today’s first victory in the Tennessee House is definitely an encouraging sign. The “no postponement” votes of 50 House members brought some much-needed and justifiable cheer to everyone working at the many suffrage campaign offices around town, and as the shock of yesterday’s still unexplained defections wears off, it is being replaced by cautious optimism.