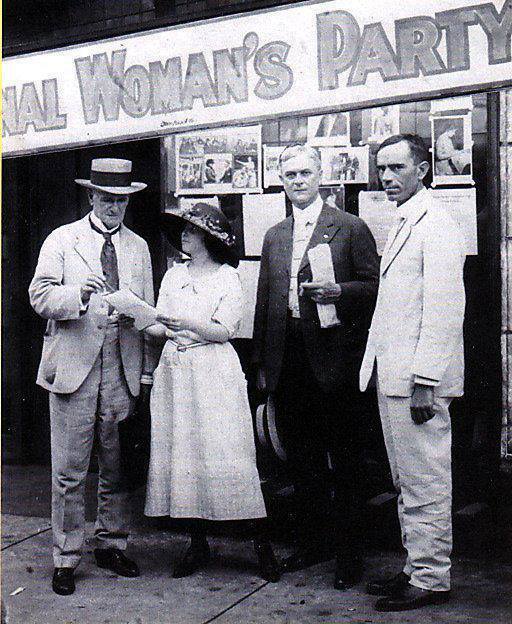 PHOTO: Anita Pollitzer of the National Woman’s Party talking to members of the Tennessee Legislature in front of the party’s campaign headquarters in Nashville.

August 12, 1920: This week may have started with a huge setback, but it looks as if it will end with a major step forward for woman suffrage! The Tennessee House and Senate Committees on Constitutional Conventions and Amendments held a joint three-hour hearing earlier this evening on the Susan B. Anthony Amendment, which if ratified by one more State would ban sex discrimination at the polls nationwide. After the hearing, it was said that there will be a favorable report by the Senate committee delivered tomorrow, and the House committee is expected to given an equally positive report on Monday, the 16th. If the ratification resolution is reported to the full Senate tomorrow it will get that body’s approval within an hour, according to Senate Speaker Andrew Todd.

Todd is not alone in his optimism, as the momentum seems to have shifted back to our side just when it counts. Governor Albert Roberts, who has been personally lobbying for suffrage among the legislators, said tonight that the adoption of the ratification resolution by both House and Senate was assured “unless something miraculous occurs.”

Suffrage leaders are now expressing views much cheerier than those of just two days ago when stunned by still unexplained defections in the Senate and House. But with many previously uncommitted legislators now jumping on the bandwagon and pledging for suffrage, there are now predictions not just of victory, but speculations on how great a victory it will be. The most optimistic poll shows 24 votes for ratification in the Senate, 17 out of 33 being needed, and 60 in the House, where 50 out of 99 are required.

Though outwardly confident that they can still defeat ratification, anti-suffragists are apparently so desperate that they are counting on the fact that the Senate vote may be taken on Friday the 13th to be useful to their cause, and are hoping for bad luck to strike “Votes for Women” advocates. But it was the “antis” who had the bad luck today, as they lost one potentially powerful weapon in their arsenal.

It had been feared that Speaker of the House Walker, who switched to the anti-suffrage forces two days ago, might use his position to delay a vote on the ratification resolution indefinitely if his side appeared to be losing. But today he said that if he and his forces were in for a defeat, he “would not delay the game but would take it right away.” Senate Speaker Todd said that filibustering on the issue would not be permitted, so there appear to be no obstacles to official roll-call votes in the very near future.

An encouraging sign of suffrage strength occurred earlier today in the House, where a resolution that would have prohibited any consideration of the ratification resolution during this special session, due to alleged “constitutional questions,” was rejected by a voice vote. Only three members, two less than the required number, even asked for a formal roll call. Like yesterday’s victory over a measure to hold public hearings around the State and postpone consideration until August 24th, this still isn’t the same as a vote on ratification itself, but it’s a very positive sign.

Today saw the Democrats apply national pressure on the State legislators in the same way Republicans did yesterday. Ohio Governor James Cox, the Democratic nominee for President, was giving a speech at Camp Perry, Ohio, when upon hearing what turned out to be an erroneous report that a vote on ratification would be taken tonight, immediately dictated the following message to be telegraphed to Democratic legislators in Tennessee:

“The platform presented to the country by a political party is not only an evidence of intent but of good faith as well. It carries specifications which will be rendered if the opportunity presents. In the modern and better day of American politics it is regarded as a promissory note. The National Democratic Convention declared for the principle of woman suffrage and pledged the party to the earnest effort toward its adoption. The Democracy of Tennessee has the chance to redeem the pledge given and I earnestly hope that it will not hesitate in the face of manifest duty.”

Legislator pledges, party platforms, expressions of support for suffrage by State and national figures, and polls by even the most politically astute suffrage groups are all significant, but can’t actually ratify a Constitutional amendment. Seventeen members of the Tennessee Senate and fifty in the House can complete the process of ratification by voting in favor of the ratification resolution. If they approve, the proposed Susan B. Anthony Amendment will have its 36th ratification, be formally proclaimed as the 19th Amendment to the U.S. Constitution when the U.S. Secretary of State certifies it as properly ratified, and the long battle over whether a State has the right to prohibit someone from voting solely “on account of sex” will have been explicitly and permanently settled in favor of equality.

Though there’s renewed confidence among members of the National Woman’s Party and the National American Woman Suffrage Association tonight, there’s anxiety as well, as the week’s events have reminded everyone of just how unpredictable politics can be. But as the Senate roll call rapidly approaches, no one working here for suffrage doubts that everything that could have been done to insure a victory has been done, and that there will be absolutely no slackening of efforts until after the final vote is cast in the House next week.