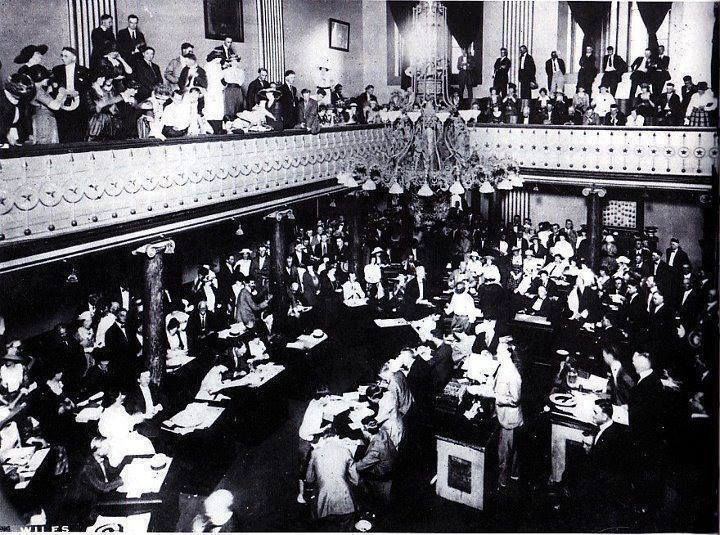 August 13, 1920: There’s jubilation in Nashville tonight, following a victory in the Tennessee Senate that exceeded even the most optimistic predictions, and bodes well for the final vote in the House on ratification of the Susan B. Anthony (woman suffrage) Amendment.

Ever since this special session of the legislature opened four days ago, it’s seemed like a ride on a political roller-coaster, with legislators going from definite pledges of support to uncertainty, or even defecting to the anti-suffrage side. Loyalties changed so rapidly that even when the numbers seemed to favor ratification, they couldn’t be counted on to stay that way for long. But when it finally came time to cast actual votes, the pro-suffrage State Senators dominated the proceedings from the beginning.

A majority of the Senate Committee on Constitutional Amendments, which held joint hearings on the ratification resolution with its House counterpart last night, gave a favorable recommendation. Relying upon a recent U.S. Supreme Court decision, the report told the Senators that the legislature has a “legal and moral right to act,” and that the clause in the State Constitution which requires a Statewide election to intervene between the time a Constitutional amendment is submitted by Congress to the States and its ratification by the Tennessee Legislature is “invalidated by the U.S. Constitution.”

An anti-suffrage senator made a motion to adopt the minority report instead, which disagrees with the majority’s interpretation of the Supreme Court’s decision, but his move failed by a vote of 23 to 10. Since only 17 votes are needed for a majority in the 33-member Senate, this particular Friday the 13th was off to an uncharacteristically fortunate start for our cause.

Senator McFarland then tried to stop the ratification resolution by making a “point of order,” but the Chair overruled him, and was sustained by a vote of 27 to 5, one member not voting. This was followed by two hours of intense debate on the ratification resolution itself. At one point, when Senator Chandler began making personal attacks on Carrie Chapman Catt, then on suffrage workers in general, Speaker Todd felt it necessary to chastise him, and said, to much applause from the gallery: “These slurs do not meet approval of the good women of Tennessee.”

Finally it was time for a vote on the ratification resolution. Most polls – uncertain and possibly overoptimistic as they were – had predicted 20 to 22 favorable votes in the 33-member Senate. The highest estimate was 24. When the 17th vote for ratification was cast, and a majority assured, a great cheer went up from the gallery. It was so enthusiastic that it was necessary to suspend the roll call. Even when the “ayes” and “nays” resumed, it was hard to hear the votes being cast, but eventually the last name was called, and the final tally stood at 25 to 4, with 4 not voting. The announcement of the result was accompanied by another loud outburst, which required the Sergeant-at-Arms to intervene to quiet the chamber so the legislators could get on with other business.

Of course, the Senate has always been considered much easier to win than the House, but the size of the margin, and the fact that it was greater than anyone – even Carrie Chapman Catt – expected, has given every supporter of suffrage here a tremendous boost in confidence.

Attention now turns to the House, where the result is far less certain. Among other complicating factors is the fact that its Speaker, Seth Walker, who had been presumed to be a strong supporter of suffrage, defected to the anti-suffrage side three days ago, and has considerable influence among his fellow House members. The House is also three times as large as the Senate, so there are far more legislators to persuade and monitor. But the heavy lobbying continues, both here in Nashville and from elsewhere.

The Tennessee Legislature is overwhelmingly Democratic, and today the nation’s top Democrat, President Wilson, sent a telegram to House Speaker Walker, saying: “May I not, in the interest of national harmony and vigor and of the establishment of the leadership of America in all liberal policies, express the earnest hope that the House over which you preside will concur in the suffrage amendment.” This follows last night’s telegram from Democratic Presidential nominee James Cox to Democratic State Senators hours before the vote. Earlier tonight, Democratic Vice-Presidential nominee Franklin D. Roosevelt expressed his delight at today’s result and attacked Republican Presidential nominee Warren G. Harding’s record on suffrage.

There’s a consensus here that the House vote will be extremely close, so even rumors are now being taken into consideration when making predictions of what will happen next week. One story floating around town tonight is that the anti-suffragists are planning to ask their supporters in the House to go home so that a quorum will be lacking, and no action can be taken on the ratification resolution for the rest of the special session. If they’re even considering such a radical action – and one that has failed when tried by others in the past – it means that despite their public pronouncements of confidence, in private they’re desperate.

Statements from suffrage leaders give the impression that they are as confident as anti-suffragists are discouraged. “So far so good; we will now push for victory in the House,” said Florence Bayard Hilles, who heads the Delaware branch of the National Woman’s Party. Even Alice Paul, never easy to please when it comes to support for suffrage, has expressed satisfaction with recent actions by President Wilson, Democratic Presidential nominee Governor James Cox, and Republican Presidential nominee Senator Warren G. Harding.

Interestingly enough, now that Tennessee appears to be on the verge of giving final approval to the Anthony Amendment, the battle in North Carolina seems to be heating up again. It’s still a long shot, however, because day before yesterday 63 members of its 120-member House issued a statement saying that they would not allow North Carolina to become the 36th State to ratify. But today North Carolina’s Senate Constitutional Amendments Committee favorably reported the ratification resolution to the full Senate by a 7 to 1 margin.

North Carolina Governor Thomas Bickett is also making a major push. Noting that only one more State needs to ratify the Anthony Amendment to make it the Nineteenth Amendment to the U.S. Constitution, he said that the most anti-suffragists could do now would be to delay “for six months a movement you are powerless to defeat” and that if North Carolina doesn’t ratify, “some other State will open the door and women will enter the political forum.”

Bickett reiterated the judgment of many leading Democrats that because U.S. participation in the League of Nations will be a major issue in November, enfranchising millions of women before the election would not only be just, but help the party, due to its strong support for the League, while Republicans have led the opposition:

“There is another and far deeper reason for not delaying the movement we are powerless to defeat. The big question that is going to be settled in the next six months is whether this nation shall enter an alliance with twenty-nine of the most powerful nations on Earth for the purpose of forever delivering humanity from the burdens and horrors of war. On that question the women have a sacred right to be heard, for when the cannon roar the women furnish the fodder.”

With the Tennessee Senate vote out of the way, only fifty men now need to cast a “yes” vote to enfranchise millions of women in States where only men are now permitted to vote. A House committee will hold one more hearing on Monday night, the 16th, then hopefully send the ratification resolution on to the full House the next day. If nothing unexpected comes up, the battle could be over in just four days.

Of course, everyone here lobbying for suffrage knows to keep working as hard as possible, because even in far less momentous circumstances “something unexpected” often comes up. So this will not be a weekend to celebrate today’s victory, but to work ceaselessly for the one that will count for far more next week.