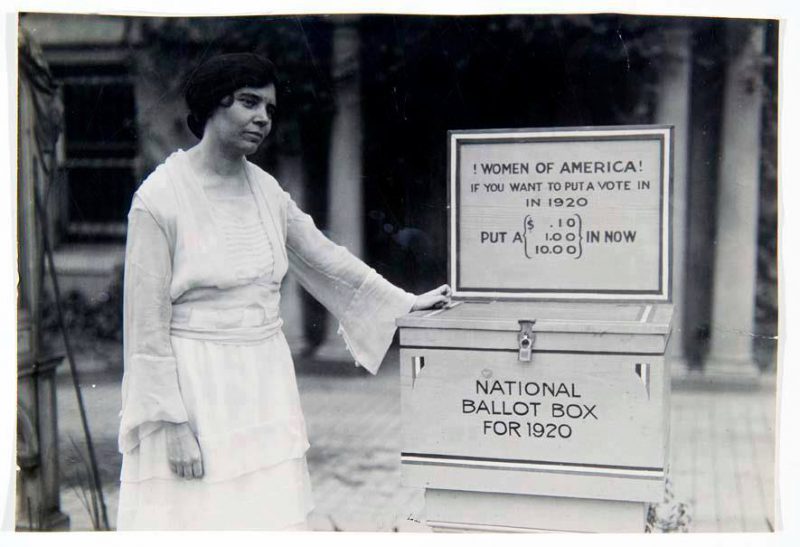 PHOTO: Alice Paul outside National Woman’s Party headquarters in Washington, D.C., with a box for donations to the N.W.P.’s campaign for the Anthony Amendment.

August 14, 1920: The suffrage campaign stayed at high intensity today despite the fact that it’s Saturday, and the Tennessee Legislature won’t be back in session until Monday. Following the State Senate’s approval yesterday, only a roll-call vote in the House is now needed to make this State the 36th and final one necessary to ratify the proposed Susan B. Anthony (woman suffrage) Amendment and transform it into the Nineteenth Amendment to the U.S Constitution, permanently and explicitly banning sex discrimination at the polls nationwide.

Today Alice Paul made it clear to Presidential candidates of both major parties that she’s holding them responsible for assuring a majority for ratification in the House next week. The unexpectedly high margin of victory in the Tennessee Senate yesterday brought hard-to-earn praise from Paul for the recent efforts of the party nominees:

“There is every evidence that the national leaders of both political parties have up to this time put their shoulders to the wheel. If they continue the same determined efforts, victory in the House, when the vote comes next week is assured. The real struggle, however, has always been in the House, and the most hopeful poll today shows hardly a vote to spare, so that the result will depend entirely upon the efforts of Governor Cox and Senator Harding and the national parties. The real battleground is not in Tennessee but in Ohio. It is not too much to say that whether or not women vote next November rests with the Presidential nominees and their efforts for ratification over this weekend.”

President Wilson is also doing his part at the White House to help win ratification by sending telegrams to Tennessee Democrats. Yesterday he sent one to Seth Walker, Speaker of the House, asking him to help with the battle there. But four days ago Speaker Walker shocked everyone by announcing that he had switched to the anti-suffrage side, and so today he replied to President Wilson’s wire in this way:

“I have the profound honor to acknowledge your wire of August 13. I do not attempt to express the views of other members of the lower House of Tennessee, but speak for those of myself alone, which on the Anthony Amendment are contrary to yours. You were too great to ask it, and I do not believe that men of Tennessee will surrender honest convictions for political expediency or harmony.”

Since almost three-quarters of House members are Democrats, strong leadership by a pro-suffrage Speaker would have assured success. But the opposition of the House’s most powerful Democrat has made things considerably more difficult. Hopefully, Walker will continue to tell fellow Democrats in the House to vote according to their own conscience and will not use his influence to pressure legislators into voting against ratification. But just having such a prestigious figure on their side is certainly a major advantage to our opponents, and could have an effect on many House members who will want to be on friendly terms with the Speaker when they seek his support for their own bills in the future.

President Wilson and Governor Cox aren’t the only nationally prominent Democrats trying to lobby Speaker Walker. William McAdoo, who recently served as Secretary of the Treasury, and got the most first-ballot votes at this year’s Democratic Convention before James Cox finally won the Presidential nomination on the 44th ballot, also sent a wire to Walker:

“As as former Tennessean, proud of his State and interested in her welfare, I trust I may with propriety express my earnest hope that the House of Representatives will concur with the action of the Senate and ratify the woman suffrage amendment to the Federal Constitution. It will add new glory to the historic achievements of the Volunteer State if her legislature now consummates the great hope and long delayed act of justice to American women, which will make them full and equal participants with men in the benefits and responsibilities of truly democratic government.”

Anti-suffragists are also busy, fully aware that their movement may be just one roll call and a few days away from extinction. They are taking comfort in the fact that they need only fight in Tennessee, because a majority of North Carolina House members have pledged their opposition to suffrage. Today anti-suffrage forces made public a telegram from R.H. Williamson of the State Rights Defense League of North Carolina:

“We are going to win in spite of pressure from the White House, from Dayton, Ohio, and from the United States Senate and the Secretary of the Navy. The will of the people of our States must be the law. If this crime is perpetrated let it not be laid at the door of either North Carolina or her daughter, Tennessee. Fight to the last ditch, and then some.”

The Tennessee House will be back in session on Monday the 16th, but doesn’t plan to act on ratification until a committee report on it is delivered. The House Committee on Constitutional Conventions and Amendments will meet again Monday night, and hopefully deliver a favorable report on the ratification resolution the next day, clearing the way for an immediate vote by the full House. Members of the committee are making no comments about what the report will recommend, but anti-suffragists are hinting that they may try to bury the ratification resolution in committee. If they do that, an effort will be made by pro-suffrage House members to call it to the floor even without a recommendation from the committee.

Though vote estimates are always questionable, there is no doubt that the tide is running in favor of suffrage. In yesterday’s Senate vote, 8 members of the 33-member Senate who had voted against Presidential and municipal suffrage for women in Tennessee last year voted in favor of ratifying the Anthony Amendment this year. Support was almost unanimous among Republicans, with 7 out of 8 (87.5%) voting for ratification, and overwhelming even among Democrats, with 18 of 25 (72%) casting a “yes” vote. The fact that the vote for suffrage (25 to 4, with 4 not voting) exceeded even the most optimistic predictions is, of course, the most encouraging sign.

But “encouraging signs” and trends aren’t what the Constitution calls for to ratify an amendment. Fifty “yes” votes in the ninety-nine member House next week are what’s needed for the 36th State ratification and final victory, so until the fiftieth vote is officially cast and recorded, there will be no let-up in the frantic pace of suffrage activity here in Nashville.