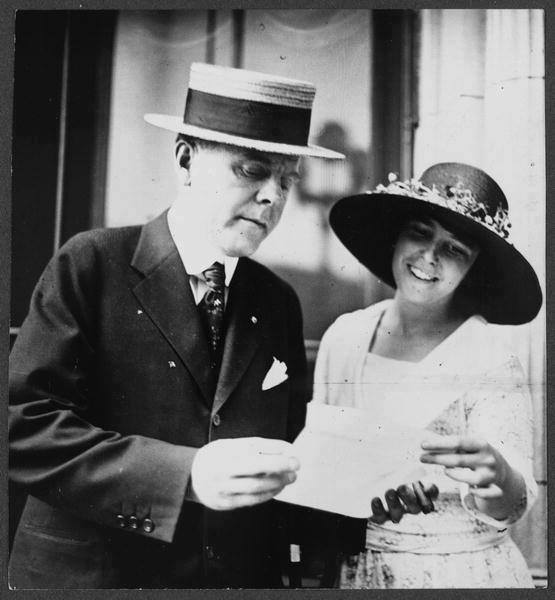 PHOTO: Anita Pollitzer, of the National Woman’s Party, checks the latest tally of vote pledges with W.J. Jameson, head of the National Finance Committee of the Democratic Party. He is one of many high-level party officials here in Nashville to lobby their fellow Democrats – who comprise the overwhelming majority of members of the Tennessee House – to vote for ratification.

August 15, 1920: Another plunge on the political roller coaster for hopes of ratifying the Susan B. Anthony (woman suffrage) Amendment before the November elections, as momentum seems to have shifted back to the anti-suffrage side.

Despite an unexpectedly big victory in the Tennessee Senate day before yesterday, the outlook for ratification in the House now looks doubtful. Polls of House members were taken several times today by both sides, indicating that no one is confident of winning – or believes pledges are valid for more than an hour or two.

The day’s good news may also be bad news. House Speaker Seth Walker announced today that there would be no attempt by him or his fellow anti-suffragists to hold the ratification resolution in committee. But he also indicated that the reason he wouldn’t try to keep it off the floor was because he’s confident that there are enough votes to defeat it.

With a majority of members of the North Carolina House firmly pledged against suffrage, and the Governors of Vermont and Connecticut stubbornly refusing to call special sessions of their legislatures to vote on ratification, Tennessee is the only realistic hope of victory before the November elections. If the ratification resolution comes up short by even a single vote here in Nashville, it means that the legislature won’t vote on it again until its regular session begins early next year. Not only will millions of women in non-suffrage States be unable to vote in November, but the 1921 suffrage campaign will have to be launched in the wake of a frustrating and devastating setback.

Though the Speaker of the House is opposed to suffrage, Governor Albert Roberts is still vigorously promoting the cause despite the political risks involved. It was learned today that two newspapers, which up until now have endorsed his bid for re-election, have told him to stop his pro-suffrage lobbying or they will actively oppose him in November.

More opposition is on its way, as an “envoy” from the North Carolina Legislature (where 63 of 120 House members recently pledged to block ratification) is expected to arrive in Nashville shortly to give “encouraging words,” and to plot mutual strategies with local suffrage opponents. The envoy, Representative W.W. Neal, is also alleged to have some sort of definitive poll showing that the Tennessee House is opposed to suffrage, and this poll will be used in an attempt to generate a bandwagon effect among uncommitted or wavering legislators that will increase the margin of rejection.

But while the result may be in doubt, the timetable of events is now starting to become clear. Tomorrow night the House Committee on Constitutional Conventions and Amendments will discuss the ratification resolution once again, and then majority and minority reports will be submitted to the full House the next day by 2:00 in the afternoon. At that point, if there are no unforeseen delays, there should be a vote on the ratification resolution either late that day or early the next. If all members are present and voting, 50 votes will be required in the 99-member House to win the 36th and final State ratification needed to make the proposed Anthony Amendment the Nineteenth Amendment to the U.S. Constitution, and ban sex discrimination at the polls nationwide.

Despite the fact that this is a Sunday, it has been no day of rest for any supporter of suffrage, and the upcoming week will be among the busiest, and certainly the most important one yet for our cause. After today’s developments, there is no danger of anyone slacking off due to overconfidence, and the highly uncertain outlook seems only to have spurred the forces of the National Woman’s Party and the National American Woman Suffrage Association to greater efforts. So, if the same dedication that has marked so many decades of the suffrage movement can be kept up for just a few days more, victory might still be achieved.