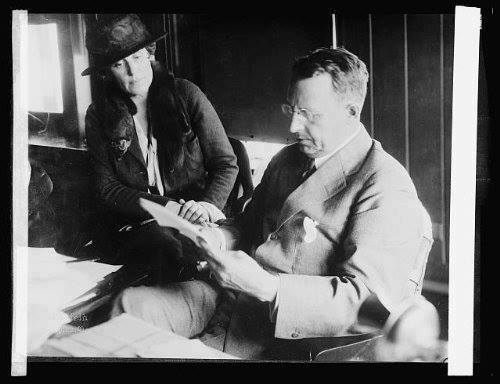 PHOTO: Abby Scott Baker at one of her many recent meetings with Democratic Presidential nominee and Ohio Governor James Cox.

August 16, 1920: Another shocking setback for the campaign to ratify the Susan B. Anthony (woman suffrage) Amendment in Tennessee, the 36th and final State needed to put it into the U.S. Constitution. Without any explanation or warning signs, 5 out of 7 members of the Davidson County (Nashville) delegation of the Tennessee House have suddenly switched from pro-suffrage to anti-suffrage.

Following the unexpectedly large favorable vote in the Tennessee Senate on the 13th, spirits and confidence soared at ratification campaign offices all over town, with polls of legislators predicting somewhere between 53 and 60 votes for ratification in the 99-member House, assuring a comfortable margin of victory. But now those estimates have been revised down to between 48 and 55 votes for ratification, 50 being needed if all members are present and voting. Unfortunately, the most reliable vote-counters are in the National Woman’s Party, and its estimate is at the low end of the spectrum. Defeat in the House would end any realistic possibility of ratification this year, and mean that women in many States would continue to be barred from voting in November’s General Election.

Of course, all estimates are literally that – educated guesses, not certainties – and what the figures will be a few hours from now is even less sure. But there’s no doubt that today’s development is a major loss for our forces, and may push even more House members on to the anti-suffrage bandwagon if the momentum isn’t reversed.

As opposition groups celebrated all over town, House Speaker Seth Walker, who defected to the anti-suffragists six days ago, left no doubt about his vote estimate when speaking to a cheering crowd at one of their rallies:

“We have ratification beaten; that is all there is to it.”

But suffragists have decades of experience at rebounding from setbacks and ignoring opponents’ confident boasts, so the battle goes on. There are at least 1,000 people here in Nashville working for or against our cause, and since supporters wear yellow roses and opponents wear red ones, activists are easy to spot in hotel lobbies and on the streets. A few lobbyists were even on the floor of the House earlier today.

One way or the other, the battle here will be over soon. Earlier this evening the House Committee on Constitutional Conventions and Amendments voted 10 to 8 to report the ratification resolution favorably, though the minority will submit its own report to the full House as well. That will clear the way for a possible vote tomorrow, and certainly no later than the day after tomorrow.

In the meantime, efforts continue nationally as well as locally. Governor Roberts made a telegram sent to him by Democratic Presidential nominee James Cox public tonight:

“I earnestly hope that you will do everything in your power to aid in the immediate ratification of the suffrage amendment. It is a platform pledge of our party and one which every Democratic legislator should be proud to support. Great forces for good represented by the womanhood of the nation will be unloosed with the final adoption of the Nineteenth Amendment, and I again urge your best efforts to this behalf.”

Abby Scott Baker, political coordinator of the National Woman’s Party, met with Cox today and once again urged him to come to Nashville to lobby personally now that the situation is rapidly deteriorating. Baker informed him that the votes appear to be lacking in the Tennessee House. Though it doesn’t look like Cox will be able to come here, he will keep lobbying legislators by telephone while conducting his Presidential campaign.

As to Senator Harding, the Republican Presidential nominee, Baker met with him last night, and conveyed to him her apprehension about the upcoming vote. But today he was unwilling to say anything about ratification of the Anthony Amendment. The Harding camp seems to be having renewed concerns about whether Tennessee can legally ratify. On August 13th a letter from Harding to a State legislator was read at a committee hearing in which Harding said:

“I had heard something about the constitutional inhibition against your legislature acting upon the Federal amendment, but I did not know of the explicit provision to which you make reference. I quite agree with you that members of the General Assembly cannot ignore the State constitution … I did say and I still believe it would be a fortunate thing for Republicans to play their full part in bringing about ratification. I should be very unfair to you and should very much misrepresent my own convictions if I urged you to vote for ratification when you hold to a very conscientious belief that there is a constitutional inhibition which prevents your doing so until after an election is held.”

The “inhibition” to which Harding refers is one which prohibits Tennessee from ratifying a Federal Constitutional amendment submitted by Congress to the States until after a Statewide election has been held. Since the Anthony Amendment was passed by Congress on June 4, 1919, that would appear to make Tennessee unable to take any action until after the November 2, 1920 election. For that reason Tennessee and some other Southern States with similar provisions were ignored by suffragists and anti-suffragists alike until this June, when the U.S. Supreme Court made a ruling in a case involving Ohio’s ratification of the 18th Amendment. Most legal scholars believe this ruling invalidates all restrictions on a State legislature’s ability to ratify a Constitutional amendment at any time. The Tennessee Attorney General has stated that the Supreme Court’s ruling allows Tennessee to ratify.

But this State constitutional provision does complicate things, and could cause an unprecedented crisis. If Tennessee ratifies, there is no doubt that the “antis” will ask the Supreme Court to decide whether Tennessee’s ratification is valid. But if the Court rules in favor of Tennessee’s ratification after the election has taken place, and women in non-suffrage States were barred from registering to vote until the case is decided, the election results would be considered an invalid expression of public sentiment, and might be legally challenged by the losing candidate. On the other hand, if women are permitted to register and vote during the appeals process and the High Court then decides that Tennessee’s law is different enough from Ohio’s to be valid, then millions of “illegal” votes will have been cast under the authority of an amendment that was never properly ratified, and the election could also be seen as invalid. The Supreme Court does not even begin its next session until October, and there’s no predicting when a ruling would occur.

So, as if there wasn’t enough to worry about with wildly varying and rapidly changing estimates of how many votes there are for ratification in the Tennessee House, there’s also the coming fight in the courts. There is only one narrow path to total victory. First, Tennessee must ratify, then there must be no court injunctions issued against women registering immediately and voting in November in States where they cannot presently vote. This must then be followed by a favorable ruling in the Supreme Court on the Anthony Amendment’s validity. Suffrage leaders, both militant and more conservative, believe that this is the path that will be followed if that first critical step takes place tomorrow or the next day.

This is going to be a long night at the headquarters of both the National Woman’s Party and the National American Woman Suffrage Association here in Nashville, with everyone at both locations hoping it will be the last such night!