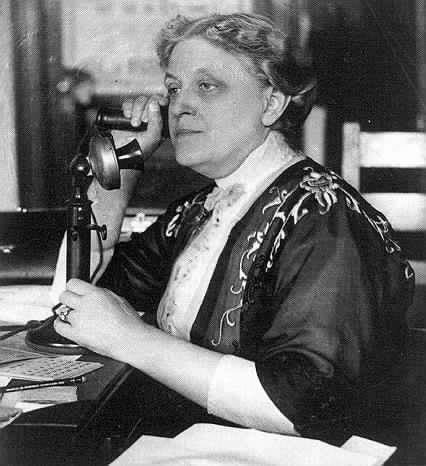 PHOTO: Carrie Chapman Catt, head of the National American Woman Suffrage Association from 1900-1904 and 1915 to the present.

August 17, 1920: Anxiety remains extremely high in suffrage campaign offices here in Nashville tonight because there was no vote on ratifying the Susan B. Anthony (woman suffrage) Amendment to the U.S. Constitution by the Tennessee House today. But four hours of intensely bitter debate shows that legislators on both sides know just how critical this vote will be when it finally occurs.

Thirty-five of the thirty-six States needed to ratify the amendment have already done so, and the ratification resolution passed the Tennessee Senate on the 13th. So, the 99-member House now has the ability to either finish the process of ratification, and ban sex discrimination at every polling place in America, or it can continue to keep millions of women in non-suffrage States from registering to vote and going to the polls in November by rejecting ratification.

The North Carolina Senate – which was thought to favor ratification – voted just a few hours ago to postpone consideration of the issue until its next regular session in 1921. A majority of House members there are already on record as opposed to ratification. There are no other unratified States whose legislatures are currently in session and thought to be favorable to suffrage. There are no realistic prospects for ratification in Vermont or Connecticut, even though most legislators would probably vote to ratify if given a chance. But because they have already adjourned their regular sessions, they can’t meet until next year unless summoned to a special session by the governor, and the governors of both States have made it clear for many months that they will not issue such a call. So, it’s all up to Tennessee for this year.

Whether the Tennessee House is “pro” or “anti” suffrage is the subject of considerable speculation, and despite confident statements coming from our leaders as well as those of the opposition, no one really knows for sure. There were a number of setbacks last week, starting with the Speaker of the House unexpectedly announcing that he was now anti-suffrage, and ending with 5 out of 7 members of the Davidson County (Nashville) delegation joining him by defecting to the opposition as well. But despite a disappointing week, efforts to get a favorable vote have never slackened, and today they were at their peak.

Never in the history of the Capitol has there been a greater demonstration of support and opposition to a measure being voted upon. Every legislator is immediately besieged upon arrival by those determined to get a definite commitment, and have him publicly show his sentiment by wearing a yellow (pro-suffrage) or red (anti-suffrage) rose in his lapel. Some of our best lobbyists – as well as some representing the opposition – were even talking to House members at their desks until the legislators voted to have all visitors sent to the galleries. The galleries were then quickly decorated with yellow suffrage banners from a number of organizations, plus the purple, white and gold of the National Woman’s Party.

The debate began when Representative Riddick moved that the House concur with the Senate in its approval of the Anthony Amendment. He noted that at one time 62 members of the House – 12 more than needed for a majority of 50 – had signed pledges of support for ratification, and that they should keep their word:

“The Senate has vindicated itself, and we have written pledges of 62 members of the House. What do you say to violation of a written pledge?”

Representative Riddick then read a long list of national and State leaders who favor ratification, and challenged his opponents to come up with a similar list of prestigious individuals. Clearly unable to do so, Representative Boyer instead argued that suffrage would supposedly be degrading to women:

“Women are the best thing God ever made, and I would not pollute them by allowing them to wade through the filthy waters of politics. My wife, nine daughters and eight daughters-in-law think I can represent them at the polls, and I guess what’s good enough for them will have to be good enough for the rest.”

Speaker of the House Seth Walker, whose unexpected change of loyalties last week has caused great speculation as to his reasons for the switch, said that he was opposed to ratification because a Federal amendment would force woman suffrage upon other Southern States that have rejected it. However, he didn’t explain why he suddenly realized this just eight days ago.

Representative Hanover, who is in charge of getting the resolution through the House, noted that last year the Tennessee Legislature authorized the women of Tennessee to vote in Presidential and municipal elections, that they deserved full suffrage, and the same should be the case for women all around the country:

“Ours is a great Volunteer State, and women from East, West, North and South are looking to us to give them political freedom. Tennessee never does things by halves for women. What we do for them as Southern men we should have the privilege of doing for other women that ours may be truly a democracy. Those of us who served overseas know no geographical distinction. I am voting for this because it is a moral question.”

Outside pressures are still critical, and according to Alice Paul, Democratic Presidential nominee and Ohio Governor James Cox has said that he is now sufficiently worried about the vote on the ratification resolution that he is prepared to go to Nashville to personally lobby for it. She said earlier today that Cox was planning to leave right after a speech to the Democratic State Convention in Columbus, Ohio, and could be here by noon tomorrow. Cox has been regularly talking by telephone with Tennessee Governor Albert Roberts, who has ignored threats of opposition to his re-election campaign by powerful newspapers if he persists in working for suffrage. Roberts says he would rather go down to defeat in November than desert the pro-suffrage Democratic Party Platform and his own promises.

Republican women are equally busy lobbying Ohio Senator Warren G. Harding, their party’s Presidential candidate. Though he favors suffrage, he is now expressing reluctance to get involved in the Tennessee campaign due to doubts about whether Tennessee can legally ratify. But most legal scholars and the State Attorney General say that a U.S. Supreme Court decision in June regarding Ohio’s ratification of the 18th Amendment seems to invalidate all restrictions on a State legislature’s right to ratify at any time.

Late in the day, hoping to keep the legislature in session, and get a vote tonight, some suffragists in the galleries went out of the Capitol to bring back $20 worth of sandwiches and iced tea for our hungry and thirsty supporters in the House. But the Doorkeeper refused to let the refreshments be passed in, so a coalition of exhausted legislators on both sides of the issue voted for adjournment until tomorrow.

Despite some worrisome developments, such as a few House members who voted in favor of Presidential and municipal suffrage for Tennessee women last year making speeches against the Anthony Amendment today, most suffrage leaders, such as Charl Ormond Williams and Harriet Taylor Upton, are making confident statements tonight. The fact that it was anti-suffragists who moved for adjournment is also a good sign, because it means they were not certain they had the votes to defeat the ratification resolution today.

The midnight oil will burn again tonight in Carrie Chapman Catt’s Hermitage Hotel ratification headquarters, as well as in the offices of the National Woman’s Party, as both groups plan how to get every possible vote for ratification. But if Catt’s prediction comes true, this may be the last late night in a struggle that has gone on for many generations:

“Tennessee men will not betray the interests of their country by refusing to give women the vote. They have conferred municipal and Presidential suffrage upon Tennessee women and surely they will not withhold from others what they consider good for their own.”