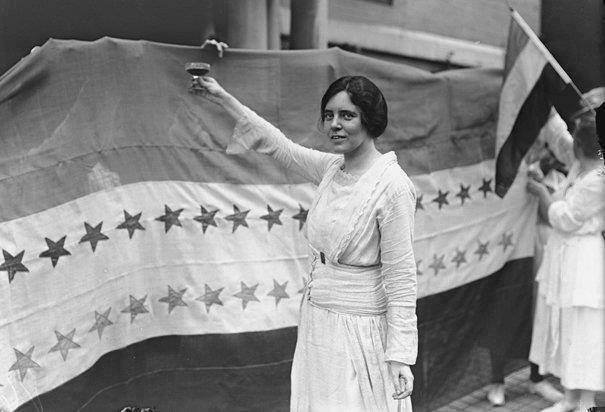 PHOTO: Alice Paul, head of the National Woman’s Party, drinking a grape-juice toast to victory in front of her 36-star ratification flag at the party’s headquarters in Washington, D.C.

August 19, 1920: Intent on assuring that yesterday’s historic victory does not become muddled by a vote to revoke approval, suffrage supporters spent today keeping company with every Tennessee House member who voted to ratify the Susan B. Anthony (woman suffrage) Amendment. When not being fanned on the House floor when it was in session, the legislators were entertained by being taken to luncheons, on country drives, or to motion picture theaters.

The anti-suffrage Speaker of the House is determined to have the ratification vote reversed, and could call for reconsideration without a moment’s notice at any time the House is in session for up to two days after the ratification resolution’s passage. Since a single vote constituted the margin of victory that gave what is now the 19th Amendment the 36th and final State ratification it needed to become part of the U.S. Constitution, it’s essential that every House member who voted “Aye” yesterday be present and still support woman suffrage should a vote to reconsider the resolution be called. Fortunately, our “Votes for Women” advocates who packed the galleries from the beginning to the end of the session today were relieved to find that nothing other than routine business was done.

Tonight, however, House Speaker Seth Walker announced that 47 members of the House had signed pledges to vote to reconsider ratification. Since that’s the same number who voted against suffrage in the initial 49-47 roll call, it means that no “anti” has converted to the pro-suffrage side, so no pro-suffrage legislator can be allowed to defect if the majority for suffrage is to be maintained for one more day. Three legislators were absent from the original vote and may – or may not – arrive here tomorrow. If they do take their seats, it is hoped the reports that two of the three are pro-suffrage are true. But presumptions about how a legislator feels have been proven wrong many times during the switching of sides that has taken place over the past 10 days, so any new arrivals would only add to the uncertainty.

Though the legality of a State reversing its ratification is highly questionable, and has never been legally recognized, such a rescission vote would clearly complicate what’s now a straightforward, purely ceremonial process. The Governor must certify that Tennessee has properly ratified, then send the certification on to the U.S. Secretary of State. Secretary Colby will then officially proclaim that the Anthony Amendment is now the Nineteenth Amendment to the United States Constitution.

Article Five of the Constitution does not require the Secretary of State to issue a proclamation of ratification, so the Anthony Amendment fulfilled all the requirements for inclusion in the Constitution yesterday by having been passed by 2/3 of both Houses of Congress, and ratified by 3/4 of the State legislatures. But the symbolism of the Secretary of State, representing the United States Government, proclaiming that woman suffrage is now the law of the land would be quite powerful, and go a long way toward ending resistance to women registering to vote in non-suffrage States even if there are court challenges to Tennessee’s ratification.

It’s been quite a day for Tennessee Representative Harry Burn, whose totally unexpected, last-minute vote switch provided the margin of victory yesterday. While suffrage groups have been honoring and praising him, anti-suffragists have been charging that bribery was involved in his surprise vote, and both the Nashville Banner and Nashville Tennessean printed affidavits today alleging that bribes were offered Burn just before his final vote. A Grand Jury, already seated to investigate claims of “improper influence” on the State’s legislators in regard to the suffrage campaign, is now investigating these new charges, though no one on our side takes them seriously, and even some anti-suffragists seem skeptical.

Harry Burn himself told why he voted the way he did by writing in an open letter to his colleagues in the Tennessee House today:

“I know that a mother’s advice is always safest for her boy to follow, and my mother wanted me to vote for ratification. I desired that my party in both State and nation might say that it was a Republican from the mountains of East Tennessee who made national woman suffrage possible at this late date.”

When Susan B. Anthony cast her “illegal” ballot in 1872, she wrote to Elizabeth Cady Stanton that night saying she voted the Republican ticket. The Anthony Amendment itself was first introduced into Congress in 1878 by Senator Aaron Sargent, Republican of California.

However, praise is certainly due to Democrats such as President Wilson, for his active support since January 9, 1918, which even went so far as making an appeal in person before the Senate for passage of the Anthony Amendment later that year. Thanks should also go to the Democratic Party as well, which, like the Republicans, endorsed the Anthony Amendment at this summer’s national convention, and to the efforts of Democratic Presidential nominee James Cox. Tennessee’s Governor, Albert Roberts, who called the special session and lobbied hard for ratification despite great pressures on him by two influential local newspapers to get him to cease his efforts should be applauded as well.

But the initial vote in the Tennessee House yesterday was 33 Democrats in favor and 36 opposed (47.8% support), while 16 Republicans voted in favor and 11 were opposed (59.2% support), Harry Burn and his party providing the votes needed for the razor-thin 49-47 victory. (The final count was actually 50-46 because the anti-suffrage Speaker changed his vote at the last second so that he would be allowed to call up the ratification resolution again for the purpose of reversing the vote of approval.)

While some die-hard anti-suffragists fight on, others are conceding graciously. Even the New York Times, which has been second to none in its opposition to woman suffrage, said today that: ” … there is no doubt that the vote of yesterday will be almost universally taken as ending the long struggle for woman suffrage in this country.” It was noted that women had already won full voting rights in many States, and were eligible to vote for President in even more. So, 68 years after its first condescending and dismissive editorial, The Times admitted: “A movement gathering such momentum was bound to succeed in time.”

Those who had always supported woman suffrage were much more enthusiastic in their reactions, and congratulations are pouring in from around the world. Countess Maria Loschi of Rome, Italy cabled:

“American women have already good will, splendid preparation, and great power. May their final enfranchisement be blessed. May all roads be open to this new wonderful army. Be united, dear friends, especially after this deserved victory, and accept greetings from an Italian woman who has known, loved and appreciated you.”

Madame De Witt Schlumberger said: “Enthusiastic congratulations from the French Union for Woman Suffrage to their American sisters upon their enfranchisement so well merited.”

Ellen Key of Sweden wrote: “Sisters, use your enfranchisement in the noble spirit which made Susan B. Anthony great in the struggle.”

Governor Albert Roberts of Tennessee, who called the special session so that ratification could occur, received telegrams from many prominent suffrage supporters around the country, among them President Wilson: “If you deem it proper, will you not be kind enough to convey to the Legislature of Tennessee my sincerest congratulations on their concurrence in the Nineteenth Amendment ? I believe that in sending this message I am, in fact, speaking the voice of the country at large.”

But after one final night of strategy sessions, with some time out for reading congratulatory telegrams, as well as newspaper stories with long-sought headlines proclaiming “Votes for Women!” it will be back to work early tomorrow for activists in all suffrage organizations to assure that yesterday’s final victory is, indeed, final.