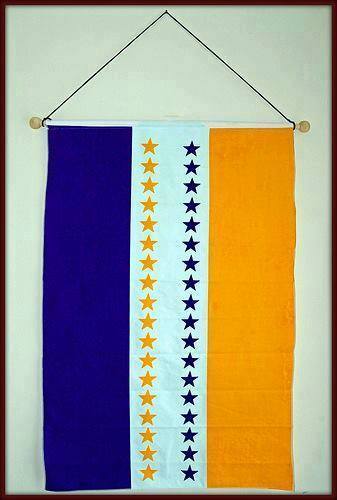 PHOTO: Alice Paul’s 36-star ratification flag, on which she has been adding a new star every time a State ratified the Susan B. Anthony (now the 19th) Amendment. The final star was added day before yesterday when Tennessee ratified.

August 20, 1920: Another day of cheering from the gallery of the Tennessee House, as day before yesterday’s pro-suffrage majority held together, and kept ratification of the 19th Amendment intact!

Moments before Tennessee became the 36th and final State needed to ratify, the anti-suffrage Speaker of the House changed his “Nay” vote to “Aye” so that he would have the right to introduce a motion – at any time during the next two days – to reconsider and reverse the vote to ratify.

But despite a boastful speech made at an anti-suffrage rally last night by Speaker Walker that he would have the votes to undo ratification today, he instead made a motion to adjourn until Monday, apparently unsure he had the votes to achieve his goal, and in hopes that he could gain them over the weekend.

Pro-suffrage House members defeated that motion with numbers identical to those cast for ratification day before yesterday, so when it became obvious that no suffrage supporters had defected to the other side, cheering broke out from our observers in the gallery.

House members supporting day before yesterday’s ratification victory agreed to adjourn only until tomorrow morning, when there will be a rare Saturday session. Though the State Attorney General and a number of experts on parliamentary procedure have said that Walker’s failure to bring up the motion to reconsider within two days should settle the issue, suffrage leaders want no loose ends.

Needless to say, our lobbyists are continuing to keep close to their legislative allies to make sure that there are no defections, because only two switches could change a 49-47 vote to defeat the reconsideration resolution into a 49-47 vote to reverse ratification and give opponents an issue to litigate in court. Although it’s generally believed that taking back ratification is not legal, because two rescissions of the 14th Amendment were never recognized, such a move would give those who want to delay implementation of the new amendment an excuse to do so.

Of course, there will be court action no matter what happens. Judge Joseph Higgins, President of the Tennessee Constitutional League, said that he would ask for a writ of injunction to be issued against Governor Roberts restraining him from signing a certification that the Tennessee Legislature had properly ratified the suffrage amendment, as well as prohibiting U.S. Secretary of State Colby from issuing a proclamation that the amendment is now part of the U.S. Constitution should Tennessee’s signed certificate of ratification arrive at his office.

The legal issue here is that the Tennessee Constitution prohibits the legislature from ratifying a Federal amendment sent to the States by Congress until after a Statewide election has taken place. The suffrage amendment was approved by Congress on June 4, 1919, and the first Statewide election after that date will not occur until November 2nd of this year. But virtually all legal scholars and authorities believe that a U.S. Supreme Court decision in June regarding Ohio’s ratification of the 18th Amendment should be interpreted as overturning all restrictions on a State legislature’s right to ratify an amendment at any time.

While desperate and dejected anti-suffragists are pinning their hopes on long-shot legal challenges and last-minute conversions, suffrage leaders are so confident that the task is nearly done that campaign offices are being dismantled, and train reservations for tomorrow are being made so that all victorious veterans of the last battle in the fight for the 19th Amendment can begin leaving for home right after the vote to reject the motion to reconsider.

Carrie Chapman Catt, never one to take anything for granted, has nevertheless begun the switch from planning campaign strategy to thinking about how to celebrate the victory. While reading through the latest batch of telegrams of congratulations she took a moment to say: “We suffragists have worked so hard and against such odds that we have forgotten how to play.”

When asked about the details of the upcoming nationwide celebration, she said:

“Many proposals are coming in, but I have made no plans. The credit is not mine. It belongs to all that faithful band who have struggled for political freedom.”

Thinking back over her three decades of work, Catt also said: “What has sustained me in this thirty year contest ? My unswerving belief in the righteousness of woman suffrage.”

Alice Paul has been busy with post-ratification duties as well. She has been sending telegrams on behalf of the National Woman’s Party to Attorneys General in States where women had no voting rights, and therefore have never been allowed to register, asking whether women will be able to register and vote in those States on the same basis as men once the U.S. Secretary of State issues his proclamation that the 19th Amendment has been properly ratified. No additional legislation in the States should be required to allow women to vote, because the amendment is self-executing and overrides any State laws restricting the vote to men. So her inquiry is simply to find out whether the funds and machinery necessary to register women are available.

Some States where women had partial suffrage and could vote for some offices but not others, such as New Hampshire, Minnesota, Massachusetts and Mississippi, as well as Virginia, where they had no voting rights, have passed enabling acts specifically affirming full voting rights under the 19th Amendment, and similar legislation is pending in North Carolina, where women have never voted.

Attorneys General in Georgia, New Mexico, Ohio, North Dakota and New Jersey, where women had partial suffrage, plus Pennsylvania, West Virginia, and Florida, where women had no voting rights, have given informal opinions that no special legislation is needed, and that women can now register and vote on the same basis as men.

The Governor of the partial-suffrage State of Missouri said that if there are any problems with the registration of women, he will call a special session of the State Legislature to remove the barriers. Yet to be heard from are Alabama, South Carolina, and Maryland, where women had no voting rights, and Connecticut, Delaware, Louisiana, and Vermont, where women had partial suffrage.

Though registering millions of new women voters for the November 2nd General Election, overcoming resistance by anti-suffrage State officials, and fighting off court challenges is a huge task, it pales in comparison to the challenge of achieving the victory won day before yesterday. So, the job is in competent hands, and should certainly get done in time.