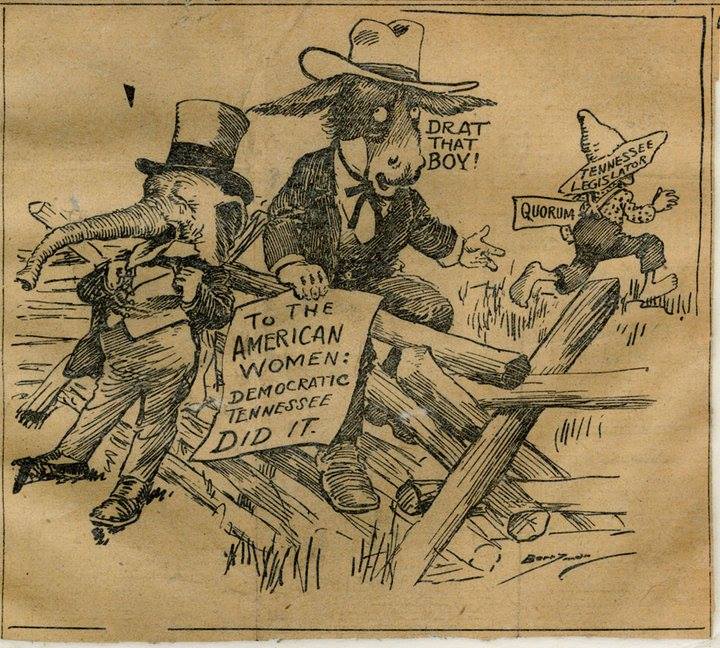 CARTOON: A Republican grins while a Democrat, who has bragged about a Democratic State giving the suffrage amendment the 36th and final ratification needed, frets about the fact that so many of those who have now fled the State to slow down the process of certification and implementation are Democrats.

August 21, 1920: Last-ditch battles are by their very nature desperate, so it shouldn’t be any surprise that anti-suffrage forces are outdoing themselves in their attempts to put up roadblocks to certification and implementation of the 19th (woman suffrage) Amendment. The first of two offensives began just after midnight, when 37 anti-suffrage members of the 99-member Tennessee House left for Decatur, Alabama, intent on staying there until the special session of the Tennessee Legislature is over. Their aim was to prevent a quorum from being present to defeat their motion to reconsider ratification and to prevent the authorization of any further ceremonial actions involving ratification.

There remained this morning just one “loose end” on the agenda of suffrage forces, which was to be eliminated by calling up and defeating a motion to reconsider the House’s ratification of the 19th Amendment three days ago. Most legal authorities believe that defeating or permanently tabling the motion is not necessary because the amendment has been passed by 2/3 of both Houses of Congress and ratified by 3/4 of the State legislatures, as the Constitution requires, and now awaits only Governor Roberts’ ceremonial certification of Tennessee’s ratification, followed by the U.S. Secretary of State’s official proclamation that the 19th Amendment was properly ratified, and is part of the U.S. Constitution.

But suffrage leaders want to take no chances on a national victory being jeopardized by some obscure parliamentary rule in one House of one State. So the plan today was to call up the reconsideration motion, then have the full House either defeat or permanently table it, presumably by the same 49-47 margin as the initial vote to ratify on August 18th. But instead of just the three seats that have been empty since the beginning of the session due to illnesses, there were forty vacant seats this morning. With only a handful of anti-suffragists at their desks, calling up and defeating the motion to reconsider was an easy task, but whether it was legal or not is still a subject of debate.

One anti-suffragist who was here today was Speaker of the House Seth Walker. After the roll was called and only 59 members of the 99-member House answered “present,” he declared that the House was 7 members short of the two-thirds that State law requires for a quorum. In accordance with standard procedure, the Speaker then declared a one-hour recess so the Sergeant-At-Arms could go out and “arrest and bring before the bar of the House such absentees as could be found.” Of course, Walker knew that they were across the State line, could not be found in time, and could not be compelled to return, since the Tennessee House has no authority in Alabama.

After the recess, T.K. Riddick, who led pro-suffrage forces to victory in the House three days ago, said that the ratification of a Constitutional amendment is a Federal, not a State matter, and that the State law regarding what constitutes a quorum does not apply. He then moved to call up the reconsideration resolution. Walker ruled the motion out of order due to lack of a quorum, but on appeal to the full House (which, of course, was populated almost entirely by suffrage supporters today), Walker’s ruling was overruled. Ironically, at this point, Walker had to turn over the Speaker’s chair to suffrage supporter Representative Odle, because an injunction sought by anti-suffrage forces to keep all the highest-ranking State officials from taking action on the suffrage amendment had arrived, and as Speaker of the House, Walker’s name had to be on the list.

Odle immediately ordered a roll call on the reconsideration resolution. To the delight of all suffrage supporters, the attempt to reconsider the House’s ratification of the 19th Amendment was defeated by 50 to 9 – an absolute majority of the House, and a surprising gain of one vote for our side during the past three days. Odle moved that the House certify and transmit the ratification resolution. The motion passed 50 to 0, the 9 remaining “antis” refusing to vote. Walker then said nothing could force him to sign the resolution. Senate Speaker Todd later noted that the joint resolution didn’t need the signatures of the Speaker of the House or Senate, and with or without Walker’s signature Tennessee’s ratification was equally valid.

That injunction was the other interesting development today. It was issued by Judge E.F. Langford of the Chancery Court here in Davidson County, to restrain Governor Roberts, Tennessee Secretary of State Stevens, Senate Speaker Andrew Todd and House Speaker Seth Walker from certifying ratification or taking any action in regard to the suffrage amendment. How seriously the injunction should be taken depends upon one’s feelings about suffrage. At the headquarters of the “antis” it was considered a major victory, stopping suffrage in its tracks. According to Charlotte Rowe: “The suffragists thought they had won by a trick and they have been foiled.”

But though plans by suffrage leaders to return home have been postponed, there is no doubt being expressed that victory has been won and will soon be made official. Just before a meeting with a number of pro-suffrage groups, Carrie Chapman Catt said: “The anti-suffrage forces have made no move which was not anticipated by us,” and that “when 37 men ran away from their posts, which they had sworn to safeguard, they immortalized themselves as being willing to delay for a few days the operation of woman suffrage.”

Meanwhile, in Washington, D.C., the National Woman’s Party gave an accounting today of just how expensive this ratification campaign has been:

“From June 4, 1919, when the amendment passed the U.S. Senate, to August 18, 1920, when Tennessee’s ratification completed the long suffrage struggle, expenditures by the Woman’s Party are totaled at $149,599.36, according to the report of the Treasurer’s department issued today.

“Since March 22, when Delaware, which suffragists hoped to make the 36th State, called her legislature into special session, $68,519.26 has been raised and spent by the national headquarters of the Woman’s Party. This does not include the sums raised and spent by Delaware for its own campaign or spent but not yet raised within Tennessee. The Tennessee campaign cost at least $10,000, bringing the total cost of the thirty-sixth State up to at least $80,000.

“By far the greater part of this sum has come in small contributions of $1 and up. The largest contributor to the ratification fund for the Woman’s Party was Miss Mary E. Burnham of Philadelphia, Pa., who gave $14,000. Next largest was the gift of Miss Fannie T. Cochran of Pennsylvania, who gave $6,100; Mrs. Charles Boughton Wood gave $5,050 and Mrs. H.O. Havemeyer of New York City, $4,850.

“Money raised by the Woman’s Party has been spent in maintaining the party headquarters in Washington and the paying of its staff of officers and organizers in Washington, who have campaigned in nearly every State in the Union for ratification, in organizing demonstrations and in other phases of the year-long intensive campaign.”

Naturally, the Woman’s Party would be appreciative of any donations that could be made, no matter how small, to help defray the costs of this final, and quite expensive phase of the battle for the vote.

Though there are still some legal tangles to sort through, the only thing anti-suffragists are likely to accomplish with their latest obstructionist tactics is to decrease what little respect may still remain for their movement, and they’ll probably have great success at that, judging by their recent actions.