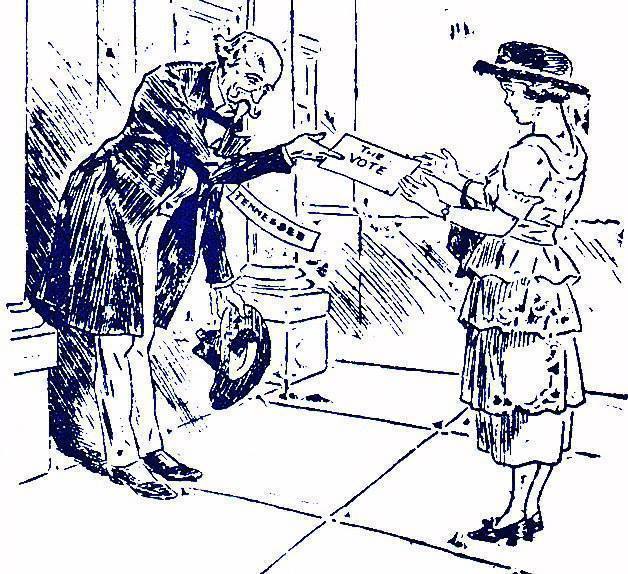 August 22, 1920: Four days have now passed since Tennessee became the 36th and final State needed to turn the Susan B. Anthony (woman suffrage) Amendment into what is now the 19th Amendment, and suffrage leaders are so confident that the formal proclamation of ratification by U.S. Secretary of State Colby will soon be forthcoming that only a few are still in Nashville.

Those who remain in the State Capital are here to fight and quickly dispose of one last roadblock desperate anti-suffragists have put up to stave off their defeat as long as possible. It takes the form of a court injunction that supposedly restrains the Governor of Tennessee from officially certifying that the suffrage amendment was properly ratified by his State. This certification must be delivered to Secretary Colby before he can officially declare that the Anthony Amendment is the 19th Amendment to the U.S. Constitution.

Since the Constitution does not require that the Secretary of State certify that an amendment has been properly ratified, only that it be approved by 2/3 of the U.S. House and Senate, and 3/4 of the State legislatures, the Secretary’s proclamation is somewhat symbolic. But the proclamation is a very powerful symbol, and the traditional way of erasing any doubts about whether the battle for an amendment has been won, because it then has the full force of the United States Government to defend it.

Even with the injunction in place, other formalities have been proceeding smoothly. The Tennessee House’s resolution of concurrence with the Senate’s approval of ratification has been transmitted back to the Senate for engrossment (the printing of a final copy of a bill or resolution after passage). This step puts it beyond the reach of the House, so it can no longer reconsider or rescind its vote to ratify without the permission of the Senate. Since the Senate approved the ratification resolution by 25 to 4 (with 4 more not voting) just nine days ago, no one worries about that happening.

Governor Roberts said today that the State Attorney General had assured him Tennessee’s approval of the suffrage amendment on August 18th was fully legal. The Governor has been a strong supporter of suffrage, and said today that he will not allow any act by anti-suffrage legislators to nullify his State’s successful ratification:

“I will exercise and bring to bear all the legal and legitimate powers of the office of Governor to consummate in an orderly and legal manner the certification of the action of the Legislature to the proper Federal officials.”

Numerous legal authorities have said that the Governor is not subject to the orders of the Chancery Court of Davidson County, but the Governor said that out of respect for the court system he will wait for the injunction to be lifted, something that is expected to happen either tomorrow or the next day after it is challenged in court.

Suffrage opponents are still issuing confident statements, though reality finally seems to be slowly sinking in, as they now talk of delaying, rather than defeating, woman suffrage. They sent this message to the Governors of seven States yesterday, and released its text to the public today:

“No women will vote for a year and a half, at least, on account of Tennessee’s action today, as the injunction will be carried to the highest court. Any State official who attempts to certify will be attacked for contempt of court, and Secretary Colby has already been warned that action in violation of the injunction is invalid under our laws.

“Secretary Colby will also be enjoined by an amended bill filed by Charles S. Fairchild and the American Constitutional League at Washington. There is no reason for any stampede in other States on account of Tennessee’s alleged action today, and press reports assuming the ratification as completed are completely misleading. Therefore, we earnestly ask you to make careful examination of ratification status before doing anything that may have a tendency to complicate the coming Presidential election and the election of Governors, Congressmen, Legislators, etc., in many States.”

The anti-suffrage Tennessee House members who fled the State to prevent a quorum from being present to remove the last parliamentary technicality that might have blocked ratification are still in Alabama. Now that their effort has failed, and the House is finished with the ratification resolution, the reason for their continued absence is uncertain.

Some say the deserters want to “get even” with the pro-suffrage Governor by preventing action on other legislation he wants enacted. Their absence would successfully prevent action on these bills, since they are State, not Federal matters, and for these, 66 of 99 House members must be present for a vote. Thirty-seven House members are in self-imposed exile in Alabama, three have been absent for the entire session due to illness, so only fifty-nine members would be able to answer “present” if a quorum call was demanded.

Others suspect the “refugees” are simply enjoying the royal treatment they’re getting from die-hard anti-suffragists wherever they go in that neighboring State. If so, they had better enjoy this attention and praise while they can, because the once-powerful and well-funded anti-suffrage organizations such as the National Association Opposed to Woman Suffrage, and the Southern Women’s League for the Rejection of the Susan B. Anthony Amendment seem about to join the Whigs and the Know Nothing Party in extinction, and soon become just embarrassing footnotes in American history.