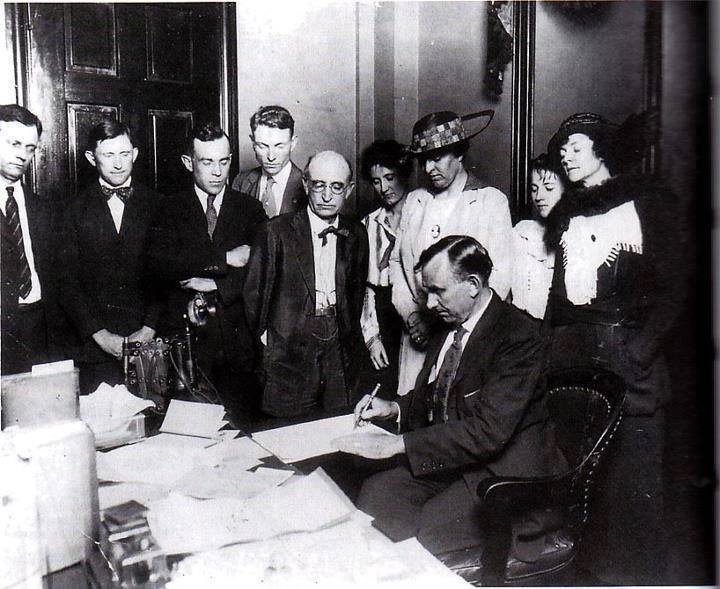 August 24, 1920: A surprise – and major – victory this morning, as the legal tangle holding up certification of Tennessee’s ratification of the suffrage amendment was finally broken! The attention of both sides in the suffrage fight had been focused on preparing for an upcoming hearing some time later this week in the Chancery Court of Davidson County to lift an injunction anti-suffragists had won barring top State officials from taking any action to certify that Tennessee had become the 36th and final State needed to ratify the Susan B. Anthony (woman suffrage) Amendment.

But Governor Roberts and State Attorney General Thompson had a plan known only to themselves and a few key suffrage leaders. Last night they petitioned Chief Justice D. L. Lansden of the Tennessee Supreme Court to issue a writ of certiorari (requiring the lower court to send up the record of the case so that its actions could be reviewed by the higher court) and supersedeas (to command the lower court to halt enforcement of its injunction against the State officials).

After the requests were granted, the Attorney General issued an opinion overnight that these writs had the effect of setting aside the injunction won by suffrage opponents three days ago in the lower court. With all legal barriers removed, the Governor called local suffrage leaders and a few of the more prominent pro-suffrage legislators into his office this morning for a signing ceremony. Within minutes, the certificate of ratification was signed, and on its way to Washington, D.C., where Secretary of State Colby has said that as soon as Tennessee’s certificate of ratification arrives, and joins the 35 already sent by other States, he will issue a proclamation that the Anthony Amendment was properly ratified, and is officially recognized as the 19th Amendment to the U.S. Constitution.

At first, anti-suffragists were stunned by this sudden and unexpected development. It took only 25 minutes after the legal documents from last night had been filed with the Clerk of the Tennessee Supreme Court at 9:55 this morning for the ratification certificate to be signed, mailed, and on a train heading North. After a week of trying to block the progress of the suffrage amendment through tricky and unpredictable legal tactics, our opponents were quite angry at being outmaneuvered today. Once they recovered from their shock, the anti-suffragists issued a formal statement saying:

“This action was taken and the injunction in effect dissolved without any notice whatsoever to the complainants or their solicitors, all of whom live in Nashville and were easily accessible although the rule of law generally and as stated by competent authority, and the rule of professional ethics and courtesy always requires that notice be given ordering counsel of the intention to apply to an Appellate Judge for the writ of supersedeas. Lawyers who have been consulted stated they hardly believe that such action was taken and acted on by Governor Roberts, as it appeared to them to be at least, if not revolutionary in character, in such violation of established law and procedure as to seem almost incredible.”

The battle in Tennessee is now clearly over, because the only way our opponents could trump the Chief Justice’s order would be to get a majority of the State Supreme Court to overturn his action. Though the certificate has already been signed and is on its way out of State, such an action, if successful, could give credibility to opponents when they challenge the legality of the Governor’s signature, and might cause Secretary of State Colby to hesitate about signing the proclamation. But since the Justices are currently on vacation in various locations, and aren’t even scheduled to meet until September 20th, and the U.S. Secretary of State’s proclamation may be issued by late tomorrow, or early the next day, time is not on the side of suffrage opponents.

Fighting to the last, the “antis” have vowed that the American Constitutional League will try to get the District of Columbia Supreme Court to issue an order restraining U.S. Secretary of State Colby from signing the proclamation that the 19th Amendment was properly ratified and is the law of the land. That may prove a somewhat harder challenge than getting a friendly local judge in Nashville to restrain State officials.

But while opponents complain, and plot desperate strategies, the last few suffrage workers still here in Nashville are now happily preparing to leave for home, their goal in Tennessee accomplished beyond any doubt. Carrie Chapman Catt can expect a huge tribute when she gets back to New York.

Alice Paul is at National Woman’s Party headquarters in Washington, D.C., sorting through replies from 24 Attorneys General in 33 States where women either had no voting rights, or the right to vote for some offices but not others. Women already have full voting rights in 15 States, plus the Territory of Alaska, so there are no concerns about their ability to vote in November.

Of the 24 officials who have so far replied to Paul’s inquiries, 17 said that no State legislation will be required to register women to vote once Secretary Colby makes his official proclamation. The Attorney General of Arkansas, one of the 17, noted that Colby’s proclamation is unnecessary if Tennessee has lawfully ratified. The Constitution does not require the Secretary of State to certify that an amendment has been ratified, but it has been the custom since Secretary of State James Madison proclaimed the 12th Amendment was ratified in 1804, and the proclamation is an extremely important symbolic statement that the U.S. Government officially recognizes that an amendment is part of the Constitution.

Four States have passed enabling acts to make special provisions to register women voters. Officials of two other States said that all necessary arrangements for women voters will be made. The reply from Alabama, where women had no voting rights, was that a ruling will be made when the State Attorney General returns.

Of the other nine, three are States in which women can already vote for President, and in a fourth, they can vote in primaries, so registration will not be a problem. Connecticut, Delaware, Louisiana, New Jersey and Vermont have not yet been heard from, but women have partial suffrage there, though it would be reassuring to know there are specific plans to assure that they will be able to vote for all offices and on all ballot questions in November.

But even with a few uncertainties, and some technicalities to be worked out, the “ratification train” is both literally and figuratively back on track today, after what might be considered a lengthy “layover” in Nashville following ratification six days ago. Barring any more legal hitches, the final act in this generations-long drama may be just 24 to 36 hours away!