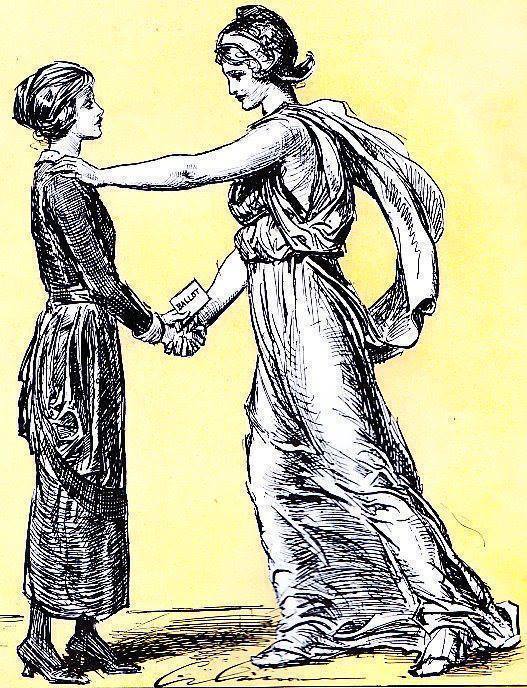 August 26, 1920: The day of victory has at long last arrived! Twenty-six thousand, three hundred and thirty-four very long and difficult days ago, a small but brave band of suffrage pioneers declared: “…that it is the duty of the women of this country to secure to themselves their sacred right to the elective franchise.” Today, the Secretary of State proclaimed that the U.S. Constitution says:

“The right of citizens of the United States to vote shall not be denied or abridged by the United States or by any State on account of sex,” and that “Congress shall have power to enforce this article by appropriate legislation.”

The battle to add those two simple sentences to the Constitution took so long that of the 300 who attended the first women’s rights convention in Seneca Falls, New York, 100 of whom signed the “Declaration of Sentiments” on July 20, 1848, only Charlotte Woodward Pierce is still living – and as an up until now voteless woman of Pennsylvania, she’s eagerly looking forward to casting her first ballot on November 2nd!

Since woman suffrage has been postponed so long, it probably should have been expected that the day would begin with one last, frustrating delay. The train from Nashville, carrying Tennessee’s signed and sealed certificate of ratification (the 36th and final one needed for Secretary Colby to certify that the Susan B. Anthony Amendment had been properly approved by 2/3 of Congress and 3/4 of the States) arrived late in Washington, D.C.

Secretary Colby had hoped the document would be delivered by 12:30 A.M., at which time he would leave home, go to the State Department and issue his proclamation. But it wasn’t until 3:45 that Charles Cooke called the Secretary to let him know that the certification had just arrived. Colby thought that was an unseemly time to sign such an important document, and since there was no possibility of anti-suffragists getting an injunction in the next few hours to prevent him from signing the ratification proclamation, he decided to have Tennessee’s certificate delivered to him at home, and sign the document in the morning.

After double-checking to be sure that all necessary documents from Congress and 36 of the 48 States regarding passage and ratification were in order, Colby signed the proclamation at 8:00, using a single steel pen, and witnessed only by F.K. Neilsen, State Department Solicitor, and Mr. Cooke. The Susan B. Anthony Amendment, ratified 8 days ago, was then officially recognized by the U.S. Government as the Nineteenth Amendment!

The fact that none of those who had worked so hard and made such sacrifices for suffrage got to see the actual signing of the proclamation seems an injustice, but it was not an intentional one. Because there were so many who had made major contributions to the effort – and because two of the principal suffrage groups were not on friendly terms with each other – Colby felt it was impossible to decide who should be invited to a signing ceremony.

Abby Scott Baker, of the National Woman’s Party, expressed the feelings of many:

“This was the final culmination of the women’s fight, and women, irrespective of factions, should have been allowed to be present when the proclamation was signed. However, the women of America have fought a big fight and nothing can take away from their triumph.”

Because the news that the 19th Amendment’s ratification had been officially recognized arrived at the same time as the realization that they had not been present at the signing of the proclamation, other suffrage leaders were also far more focused on this momentous victory than any personal slight.

Alice Paul, whose dedication to suffrage was proven by enduring imprisonment, hunger strikes, and force-feedings, and whose militant tactics kept the issue of suffrage in the public eye while putting irresistible pressure on President Wilson said:

“August 26th will be remembered as one of the great days in the history of the women of the world and in the history of this republic. All women must feel a great sense of triumph and of unmeasurable relief at the successful conclusion of a long and exhausting struggle. The suffrage amendment is now safe beyond all reasonable expectation of legal attack. This opinion was secured from high legal authorities by officers of the National Woman’s Party who devoted their efforts after the signing of the ratification proclamation to discover what further steps, if any, would be necessary to protect the amendment. Pending injunction cases were automatically thrown out of court by the signing of the proclamation according to the consensus of legal opinion.”

But Alice Paul knows that winning the battle for suffrage is not the same as winning the war against all forms of sex discrimination. On August 18th, the day Tennessee became the 36th and final State needed to complete the process of ratification, she said:

“With their power to vote achieved, women will still have before them the task of supplementing political equality with equality in all other fields. In State and national legislation, as well as in other fields, women are not yet on an equal basis with men.”

Paul also noted today that what is now the National Woman’s Party was organized in 1913 to secure passage of a Constitutional amendment guaranteeing equal voting rights for women, and that it has accomplished its original goal. But while many suffrage organizations are planning to quickly disband, and the National American Woman Suffrage Association will now finish the process of transforming itself into the League of Women Voters, Paul announced that the National Woman’s Party would be holding a convention soon to decide upon its future.

Though it would be impossible to predict what course the N.W.P. will take in this new, post-suffrage era, the fact that Alice Paul and its other leaders recognized many years ago that the only way to eliminate all the laws mandating sex discrimination at the polls was through a Constitutional amendment, it may be that a drive for a 20th Amendment to insure totally equal rights for women and men may begin not too long after the end of the campaign for the 19th Amendment.

Carrie Chapman Catt, head of the National American Woman Suffrage Association from 1900 to 1904 and since 1915, met with President Wilson at the White House soon after the proclamation was signed. She presented him with a bound volume entitled, “A Tribute to Woodrow Wilson.” It was a memorial of appreciation from the national officers and State chapters of N.A.W.S.A. for his efforts in favor of nationwide suffrage.

President Wilson was originally a supporter of woman suffrage on only a State-by-State basis. When he met with a large delegation of suffragists on January 9, 1917, his refusal to endorse the Anthony Amendment – and the poor excuses he gave as his reasons – caused Alice Paul and other members of the Congressional Union for Woman Suffrage (now the National Woman’s Party) to begin posting “Silent Sentinel” pickets along the White House fence to prod Wilson into first endorsing nationwide woman suffrage, then helping to lobby the amendment through a Congress controlled by his own Democratic Party.

Exactly one year later, on January 9, 1918, Wilson came out strongly for the Anthony Amendment the day before a key vote in the House, where it got exactly the 2/3 majority it needed. Amid continual pressure by the National Woman’s Party as well as strong lobbying by N.A.W.S.A., he became a stronger and stronger advocate of suffrage. Among his later actions were personally appearing before the Senate the night before a vote, asking the Senators to pass the Anthony Amendment as a “War Measure,” followed by numerous telegrams to State legislators asking them to vote to ratify the amendment after it passed Congress and was sent to the States on June 4, 1919.

N.A.W.S.A. officially kicked off the nationwide victory celebrations earlier this evening at Poli’s Theater, in Washington, D.C. Secretary Colby came and brought not just his own best wishes, but those of President Wilson as well. Carrie Chapman Catt recounted the challenge of getting that final State ratification in Tennessee, and noted the powerful array of forces that had been brought together to stop approval there. But our advocates were able to overcome the remnants of the old “whiskey ring,” still hoping for Prohibition repeal, the steel corporations, the railroad lobby, and the Manufacturers’ Association of Tennessee. Despite opponents using overtly racist pleas, as well as “States’ rights” arguments, anti-suffragists still came up a vote short when the final roll was called in Nashville.

Exhilarating as today’s victory may be, the task set forth at Seneca Falls has by no means been completed with the fulfillment of just one resolution. As noted in the closing paragraph of their “Declaration of Sentiments,” those pioneers saw suffrage as merely a means to attain their goal of total equality:

“Now, in view of this entire disenfranchisement of one-half of the people of this country, their social and religious degradation — in view of the unjust laws above mentioned, and because women do feel themselves aggrieved, oppressed, and fraudulently deprived of their most sacred rights, we insist that they have immediate admission to all the rights and privileges which belong to them as citizens of the United States.

“In entering upon this great work before us, we anticipate no small amount of misconception, misrepresentation, and ridicule; but we shall use every instrumentality within our power to effect our object. We shall employ agents, circulate tracts, petition the State and National Legislatures, and endeavor to enlist the pulpit and press in our behalf. We hope this convention will be followed by a series of conventions, embracing every part of the country. Firmly relying upon the triumph of Right and True, we do this day affix our signatures to this declaration.”

The struggle for absolute equality – using the same means as were outlined in 1848 – must continue with the same energy, enthusiasm, and persistence that brought about today’s win.

Hard as it may be for those who have spent decades working to win the ballot to imagine, “Votes for Women” may inevitably be taken for granted by those who will be born after this last battle was fought. But while it’s comforting to think that there will come a time when no one in this country will be able to imagine being barred from the polls solely on account of being a woman, suffragists and the work that has been done to bring about that result must never be taken for granted. So, it seems only appropriate to suggest that on August 26th of each year this crucial step toward equality be celebrated, and there be an annual re-dedication to the goal of those pioneers of 1848 to eliminate every vestige of discrimination and bigotry that may still exist.