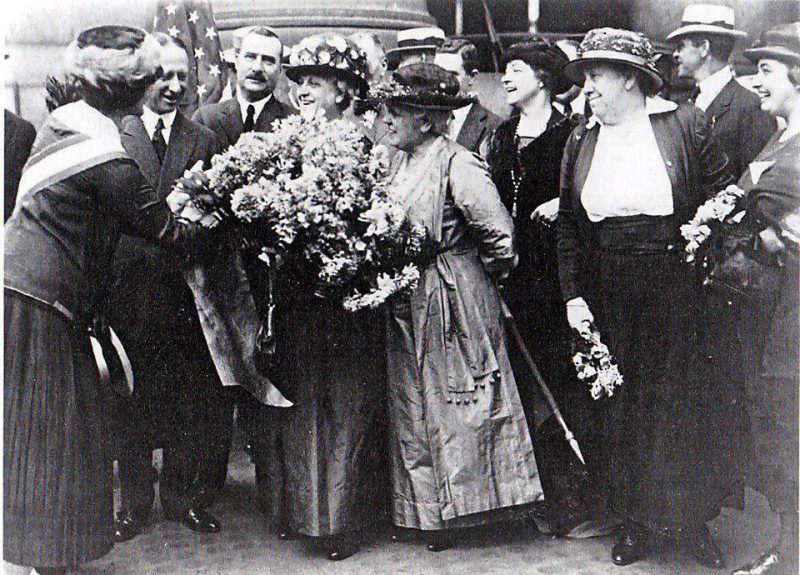 PHOTO: Carrie Chapman Catt holding the bouquet presented to her as she arrived in New York City earlier today.

August 27, 1920: Just one day after Secretary of State Colby proclaimed that the 19th Amendment was properly ratified, and sex discrimination was banned at every polling place in the nation by the United States Constitution, Carrie Chapman Catt made her triumphant return to New York today. The “Votes for Women” celebration here began with a welcome from Governor Al Smith, then became a “victory parade” down Seventh Avenue as Catt was being driven to festivities in her honor at the Waldorf.

But these were far from the first honors given her since the 42-year battle to put what was known as the “Susan B. Anthony Amendment” into the Constitution ended at 8:00 A.M. yesterday. The post-ratification commemorations began last night in Washington, D.C., with a mass meeting at Poli’s Theater. Then at every stop made by her train between the nation’s capital and New York City, enthusiastic local suffragists were there with flowers, tears in their eyes, and praise for her thirty-three years of work for the cause.

When Catt got off the train at Penn Station, she was met by 400 suffrage activists, plus a host of public officials, and members of both the Republican and Democratic National Committees. Governor Smith said: “I am very much pleased to assist in extending a welcome to the leader of the nation’s forces which have played such a large part in bringing about the political freedom of motherhood in America.” Catt then told the crowd: “This is a glorious and wonderful day. I have lived to realize the big, beautiful dream of my life – the enfranchisement of women.”

Catt arrived with three others who had worked closely with her in Tennessee for the 36th and final State ratification needed: Harriet Taylor Upton, of the Republican National Committee; Charl Ormond Williams, of the Democratic National Committee, and Marjorie Shuler, an organizer for the National American Woman Suffrage Association, which Catt led from 1900 to 1904 and has once again been leading since 1915. Catt was then escorted to a limousine decked out in suffrage colors, accompanied by U.S. Senator William Calder, Republican of New York, and other dignitaries.

Six mounted police officers led New York’s final “suffrage parade” down Seventh Avenue as the 71st Regiment Band struck up “Hail, the Conquering Hero.” Other prominent campaign workers, such as Mary Garrett Hay, marched behind Catt’s automobile while holding up suffrage banners. Catt carried with her “the biggest suffrage bouquet ever seen,” made up of suffrage-yellow chrysanthemums and blue delphiniums, tied with yellow ribbons inscribed: “To Mrs. Carrie Chapman Catt, from the enfranchised women of the U.S.”

Thunderous applause broke out as Catt entered the Astor Gallery of the Waldorf Astoria Hotel, and her speech proved worthy of the ovation. She told the audience: “We are no longer petitioners. We are not wards of the nation, but free and equal citizens. Let us practice the dignity of a sovereign people.” Speaking of the recent campaign, and looking to the future, she said: “We have proved in Tennessee that this is a government of the people, not an empire of corporations. Let us do our part to keep it a true and triumphant democracy.”

Knowing from their recent behavior in Tennessee – even after the State ratified – that opponents of woman suffrage will never graciously concede defeat, Catt said: “If anyone dares oppose your right to vote we’re coming there with a legal battle and we’ll beat them. But let us remember always that we must consecrate ourselves to the realization of government by the people, and let us refuse to support, regardless of party, the man or woman who does not promise to support that principle.”

With thirty-three years of suffrage work behind her, and more work ahead with the National League of Women Voters, as well as for the cause of world peace, Catt will first be going home to Briarcliff Manor for a few days of well-deserved rest, then begin the second part of her life as America embarks on a new era in politics.