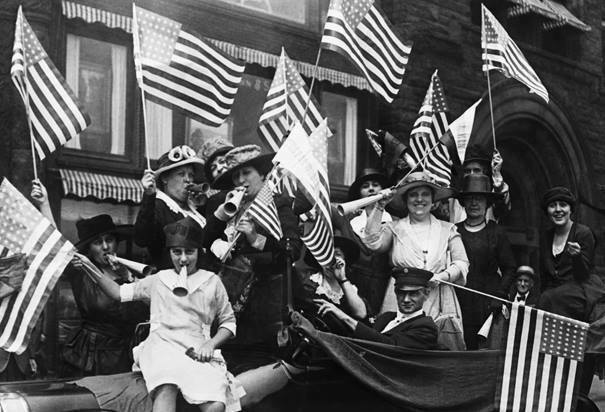 August 28, 1920: Today, people all around the country got a chance to celebrate day before yesterday’s final victory for the 19th Amendment, while Alice Paul took some time out to speculate about what the National Woman’s Party will do now that its original goal has been achieved.

On August 26th, when Secretary of State Colby proclaimed that the Susan B. Anthony Amendment was now the 19th Amendment to the U.S. Constitution, and it became officially unconstitutional to deny anyone the vote on account of their sex, Carrie Chapman Catt asked that whistles and bells be sounded at noon today, and many cities eagerly endorsed the idea.

In Chicago, Mayor William “Big Bill” Thompson issued a proclamation yesterday asking people to participate in today’s “ringing of bells, blowing of whistles, sounding of horns, and other such methods as may comport with dignity and order” to celebrate “women’s wonderful and unprecedented opportunity.” Local suffragists also asked that at the sound of the first whistle or horn, the men of Chicago remove their hats in silent tribute to the nation’s millions of new women voters.

In Los Angeles, Mayor Meredith Snyder and the local Chamber of Commerce both requested that the whistles at all the city’s industrial plants be blown at noon. In Portland, Oregon, 230 women gathered for a victory luncheon, and at noon all stood at attention by their tables, as they listened to the ringing of bells that paid tribute to their triumph. In Fort Wayne, Indiana, the local League of Women Voters held a celebration as well, but it will be back to post-suffrage business tomorrow when it hires a pilot to drop leaflets over the city advising women to register early enough to be eligible to vote in the upcoming November elections.

In Boston, a variety of tunes were played on the Christ Church chimes at noon, including such interesting choices as “The Last Rose of Summer” and “Oh, Dear, What Can The Matter Be ?” while local suffragists gathered to celebrate. Two suffrage flags flew over Boston City Hall alongside the Stars and Stripes, and another huge rally was held in Faneuil Hall. In Worcester, Massachusetts, where suffrage work goes back 70 years to a national women’s rights convention in 1850, there was a mass meeting on City Hall Plaza. The mayor extended his greetings and congratulations to suffragists following the ringing of church bells, factory whistles, and even fire alarms.

But the best idea for a celebration may have come from Columbus, Ohio. In addition to commemorating the Secretary of State’s proclamation of the ratification of the Anthony Amendment, a campaign was launched today to make August 26th an official national holiday known as “Susan B. Anthony Day.” Other women’s rights groups will soon be enlisted in the effort. Considering the importance of Anthony’s work for women’s equality, and the impact her amendment will have on the nation’s future, an annual celebration every August 26th seems totally appropriate, and sure to come about in some form.

Alice Paul certainly appreciated the nationwide salute to women’s enfranchisement, but seems more interested in bringing about future gains for women than celebrating the past. She is preparing to go to New York to meet with other high-ranking officers of the National Woman’s Party to decide the group’s future direction now that its original purpose of getting a Constitutional ban on sex discrimination in regard to voting rights has been accomplished. She said today:

“Certain groups in the party advocate the formation of a separate women’s political party, with candidates and a platform. Other groups urge that we work for the elimination of discrimination against women in existing political parties. Still other groups assert that the party in securing a Federal suffrage amendment has fulfilled its purpose and is no longer needed. Decision by a majority of our executive committee will determine future actions.”

In view of the success her party has had in directing the energies of dedicated feminists toward specific actions which were crucial to bringing about their initial goal, it seems highly unlikely that such a powerful organization, composed of extremely effective activists, will simply disband. But regardless of whether the N.W.P. decides to compete with the major parties and field its own ticket, or work with Democrats and Republicans, we already know what Alice Paul’s post-suffrage goal is. Minutes after Tennessee’s ratification on August 18th assured the Anthony Amendment’s inclusion in the Constitution, she was already noting that political equality was not the same as absolute equality:

“With their power to vote achieved, women still have before them the task of supplementing political equality with equality in all other fields. In State and national legislation, as well as in other fields, women are not yet on an equal basis with men.”

Exactly how an end to all sex discrimination will be brought about is still to be decided. But Alice Paul has often said: “When you put your hand to the plow, you can’t put it down until you get to the end of the row.” So, it’s likely that we’ll be hearing more from her and other veterans of the suffrage campaign until “the end of the row,” and total equality is reached.