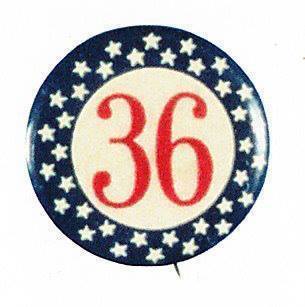 PHOTO: A popular button noting that Tennessee could be the 36th and final State needed to ratify the Anthony Amendment.

August 4, 1920: The already uncertain chances of Tennessee ratifying the Susan B. Anthony (woman suffrage) Amendment decreased today as Republican Presidential nominee Warren G. Harding said he was not presently willing to get involved in pressuring his fellow party members there to vote “yes.” With only five days left until the Tennessee legislature is expected to be called into special session, and Republican support fading, it had been hoped that Harding, like Democratic Presidential nominee James Cox, would take an active part in the suffrage campaign, and as his party’s Presidential nominee would use his considerable influence to help assure solid G.O.P. support in Tennessee.

Millions of women are already eligible to vote for all offices in 15 equal suffrage States (plus the Territory of Alaska), and women can vote for President in 12 more, Tennessee among them, so their support has become important to any Presidential candidate. But though the Republican Party earned much good will among women due to its overwhelming – and crucial – support for the suffrage amendment when it was in Congress (91.3% of House Republicans and 81.8% of G.O.P. Senators voted for it), and despite the party being in complete control of 26 of the 35 State legislatures that have ratified so far, Republican officials and organizations are starting to worry. Any apparent lack of support for woman suffrage at this late date might cause all those voting women to blame Republicans for the failure of the Anthony Amendment to be approved in time to enfranchise their voteless sisters in the rest of the States before the November 2nd election.

Recently, the Harding-Coolidge League of the District of Columbia sent a telegram to Senator Harding asking him to use his influence in Tennessee, and today got this response: “You can understand why I cannot consistently urge Tennessee legislators to vote for ratification without knowing their reasons for such commitment as they have made. The situation is being reported to national headquarters, where it will be given attention at once.”

But though Harding is passing the buck to the Republican National Committee, and doing nothing for suffrage, there are still two party nominees working for our cause. In addition to Democratic nominee Cox, there will be Parley Christensen, Presidential nominee of the newly-created Farmer-Labor Party. He sent a wire to the National Woman’s Party today offering his services as he prepares for a Statewide speaking tour in Tennessee addressing farm and labor organizations.

In 1916 both Republicans and Democrats endorsed woman suffrage, but only if won on a State-by-State basis. This year – after the Anthony Amendment had been passed by the required 2/3 of both House and Senate, and ratified by 35 of the 36 States needed – both parties endorsed it at their national conventions, and even asked governors to call special sessions of their legislatures so that the proposed 19th Amendment could be ratified and become part of the Constitution before the General Election in November.

The latest analysis of votes in the Tennessee Legislature shows that though Republicans are a minority in both House and Senate, their support will still be critical in what everyone agrees will be an extremely close contest. Of the 7 Republicans in the 33-member Senate, 4 are pledged for suffrage, one is uncommitted, one is opposed, and the stance of the other is unknown. The 99-member Tennessee House has 28 Republican members, of whom 11 are pledged to vote “yes,” 5 are uncommitted, 2 are opposed, and 10 have not yet replied to inquiries. Adding to the uncertainly is a special election tomorrow to fill 3 vacant seats in the Senate and 10 in the House.

The fragility of a pledge can be illustrated by what’s happened in regard to one given by Republican House member Finney G. Carter, representing the 61st District. On July 9th he sent the following telegram to the National Woman’s Party: “I will vote in favor of ratifying the amendment to the United States Constitution extending the right of suffrage to women when it comes before the legislature of my State.” But on July 31st, Anita Pollitzer told Alice Paul in a telegram: “Carter says he is undecided because of constitutional questions.”

The Tennessee Constitution requires a Statewide election to occur between the time a Federal amendment is submitted to the States and its approval by the Tennessee Legislature. Since the Anthony Amendment was passed by Congress on June 4, 1919, this would seem to block a vote until after the November 2, 1920 election. But a Supreme Court decision in June regarding ratification of the 18th Amendment (Hawke v. Smith, 253 U.S. 221), appears to throw out all restrictions on a State legislature’s ability to approve a Federal amendment at any time. Some Tennessee legislators who don’t want to come right out and say they’re opposed to woman suffrage have been using this clause as an excuse for why they’ll be voting “no.”

So, there’s a mix of excitement, uncertainty and concern at suffrage campaign offices in Tennessee today. But for better or worse, the time when every member of the legislature will have to take a definite stand on woman suffrage by casting a vote is coming very soon.