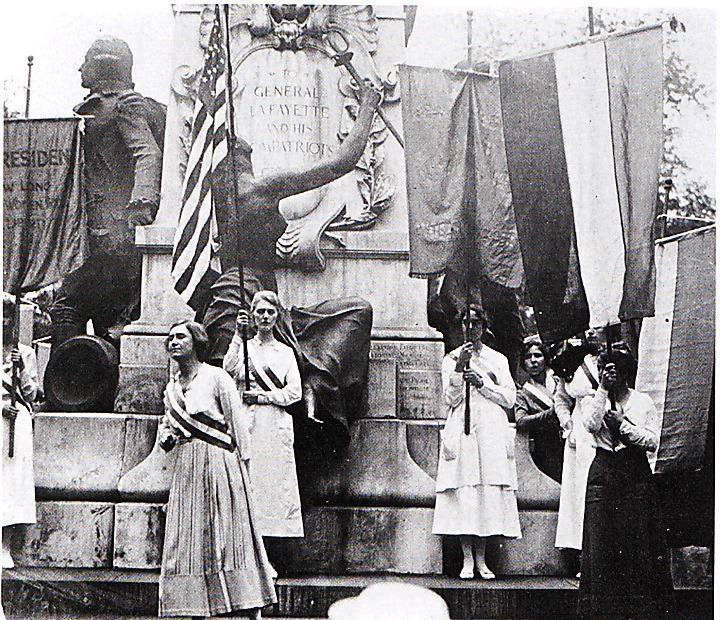 August 6, 1918: Despite ALL of last year’s convictions of the “Silent Sentinel” White House pickets having been overturned on appeal in March, the authorities are still trying to stifle the National Woman’s Party’s rights of free speech and peaceful assembly. Forty-eight of the N.W.P.’s members were arrested today when they attempted to hold a suffrage rally at the Lafayette Monument in Lafayette Park, across from the White House.

The purpose of the rally was to protest the Senate’s inaction on the Susan B. Anthony (woman suffrage) Amendment, and the fact that President Wilson has not yet applied the full weight of his influence to gaining the amendment’s passage in a Senate controlled by his own Democratic Party.

On January 10th, the day after Wilson endorsed it, the House passed the Anthony Amendment by 274 to 136 – just enough to get the 2/3 necessary – so only concurrence by 2/3 of the Senate (64 of 96 Senators) is now needed to send the amendment to the State legislatures for ratification by 36 out of 48. Today was chosen for the rally because it marks the birthday of the late Inez Milholland Boissevain, a suffragist who collapsed on stage during a grueling speaking tour of the West in 1916, and died soon after at the age of 30.

The demonstration began when Hazel Hunkins, carrying an American flag, led 100 other activists carrying banners on a march from the National Woman’s Party’s headquarters at 14 Jackson Street, to the park.

The first speaker was Dora Lewis, but moments after she began to speak while on the steps of the statue, she was seized by police officers, arrested and dragged off. Lewis was immediately replaced by another speaker, who was also arrested, and the pattern continued. Lavinia Dock, a veteran of “General” Rosalie Jones’ legendary suffrage hikes, tried to create a diversion by singing “America,” and was arrested.

The demonstrators then began to circle Lafayette’s statue while the police looked through a book of park regulations trying to find something to charge them with. Police then began making mass arrests of those in the park for “holding a meeting without a permit,” “congregating in the park,” and “climbing on a statue.” Though she was on the sidewalk, Alice Paul was arrested as well, when one of the officers pointed to her and said: “There’s the leader – get her!” Tonight she said:

“It is intolerable that American women cannot ask for a share of the democracy for which we are fighting without having their speakers and even their listeners arrested. The world will look with amazement upon the spectacle.”

The reaction of the crowd to the demonstration was mixed. Some listeners applauded when the orators tried to speak, others clapped when the speakers were arrested and taken away.

Mass-arresting suffragists is not a new tactic. Last year a total of over 200 “Silent Sentinels” were arrested for allegedly “blocking traffic” on the wide sidewalk in front of the White House while standing with colorful banners along the White House fence, and a number of them served time in the District Jail or Virginia’s infamous Occoquan Workhouse. Some of the suffrage prisoners went on hunger strikes and a few, such as Alice Paul and Lucy Burns, endured force-feeding three times a day. But on March 4th of this year, the District of Columbia Court of Appeals reversed all their convictions and declared the actions of the “Silent Sentinels” were fully legal. As the Court put it:

“So far as the information enlightens us, the defendants may have assembled for a perfectly lawful purpose, and though to a degree obstructing the sidewalk, not be guilty of any offense … It would hardly be contended that if the defendants had met on one of the spacious sidewalks of Pennsylvania Avenue to conduct a peaceable conversation, though to a degree inconveniencing pedestrians, they would be guilty under the statute of crowding and obstructing the free use of the walk … The statute does not condemn the mere act of assembling on the street, but prohibits assembling and congregating coupled with the doing of forbidden acts.”

So, it remains to be seen if today’s equally ridiculous charges can stand up to judicial scrutiny. But whether they do or not, National Woman’s Party members will not give up their right to peacefully protest the failure of any governmental body or official to do what they can to make sure that sex discrimination at the polls is permanently, explicitly, and Constitutionally banned.