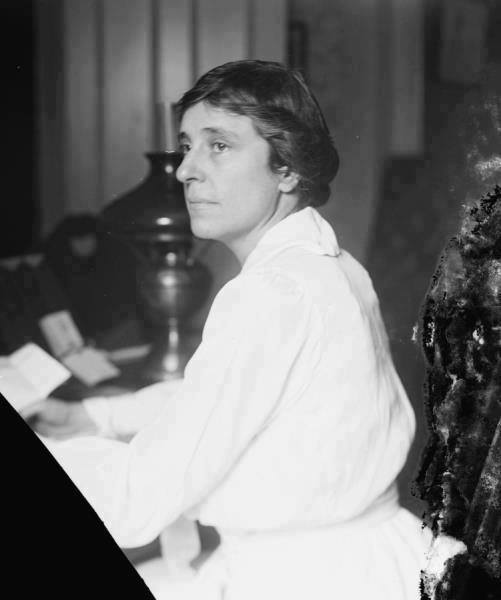 August 8, 1920: Though the special “suffrage session” of the Tennessee Legislature doesn’t open until noon tomorrow, there has been plenty of action in Nashville today. The most promising development is that of the 13 legislators elected on August 5th to fill vacancies in the legislature, 11 have now pledged to vote for ratification of the Susan B. Anthony (woman suffrage) Amendment.

Tennessee is looking more and more like it could be the 36th and final State needed to ratify, and make the Anthony Amendment the 19th Amendment to the U.S. Constitution. But no one is overconfident or slacking off in their efforts, because according to a poll taken by the National Woman’s Party, there are still two more pledges needed in the 99-member House and one more necessary in the 33-member Senate to assure a majority for passage.

Carrie Chapman Catt, head of the National American Woman Suffrage Association, has been in Nashville for some time coordinating the efforts of a number of groups from her well-established and bustling headquarters at the Hermitage Hotel. The anti-suffrage headquarters is there as well, though on a different floor, so the lobby is clearly a busy place, where many well-known advocates for both sides can be seen entering or leaving, and reporters can ask for the latest tidbits of information.

“You may say for me to Republican members of the General Assembly of Tennessee that it will be highly pleasing to have the Republicans of that State play their full and becoming part in consummating the constitutional grant of woman suffrage. It is no longer a question of policy. It is a matter of Republican contribution to a grant of suffrage to which our party is committed, and for which our party is in the main responsible.”

Democratic Presidential nominee Governor James Cox, who has already had several of his paid staffers in Tennessee working with suffrage groups, met again with Abby Scott Baker of the National Woman’s Party at his headquarters in Dayton, Ohio. This time Baker was able to give him an optimistic report. Governor Cox said this was consistent with other reports he was getting, and that he was now confident ratification would occur. But if the situation deteriorated, and additional help was needed, he pledged to do everything he could. He will be sending a personal representative to Tennessee to join other staffers already there.

Parley Christensen, Presidential nominee of the newly-formed Farmer-Labor Party, is here in Tennessee and spoke for ratification at a meeting of the Trades and Labor Council. Members of that group then lobbied the legislators who have already arrived back in town for the special session.

As might be expected, anti-suffragists are busy as well. Mary G. Kilbreth, head of the National Association Opposed to Woman Suffrage is here, as well as Nina Pinckard of the Southern Women’s League for the Rejection of the Susan B. Anthony Amendment. Two members of the Maryland Legislature who were appointed by that body to go to Tennessee to fight suffrage have arrived as well. Also present is Laura Clay of Kentucky, a well-known suffragist in her home State, but who opposes achieving suffrage by amending the U.S. Constitution. In an open letter to the 33-member Senate and 99-member House, the “antis” say:

“Seventeen men of honor in the Tennessee Senate and fifty in the House can save Southern civilization and local self-government from destruction simply by keeping their solemn oaths to the people and the constitution of Tennessee, and by giving Southern women and Southern ideals ‘a day in court.’ “

Anti-suffrage pamphlets now circulating around town declare that for the “antis”:

“Victory is mostly a question of manhood and morale … you can stop anything but death and taxes if enough real men say it shall not pass … the men who vote against ratification will go down in American history as the saviors of our form of government and the true defenders of womanhood, motherhood, the family and the State.”

The “antis” claim that those who oppose woman suffrage in general, plus those who oppose achieving it by Federal amendment, are growing in number, and already sufficient to block ratification indefinitely if Tennessee legislators are not “stampeded” into a quick approval:

“After the election both parties will be so sick and tired of ‘votes for women’ and offices for women that neither Connecticut, Vermont or Florida will ratify.”

Suffrage groups uniformly disagree. But with conflicting claims by both sides about their relative strengths, and who is gaining or losing support, it’s impossible to say for sure what the situation really is, or if estimates will have to be revised even an hour from now. So efforts by our side and our opponents will continue at a fever pitch until the final roll call settles the issue.

But one encouraging sign that the battle for the Anthony Amendment may be about to end in victory is that the National Woman’s Party is already talking about future goals in the post-suffrage era. Abby Scott Baker told Governor Cox that if Tennessee ratifies, and ends one stage of the battle for full equality, the party may hold a national convention in Chicago and kick off its next campaign by writing a platform plank that would call for complete legal equality for women in all matters. Of course, step one toward that goal of total equality is to amend the Constitution to bar sex discrimination at the polls nationwide, so the N.W.P., as well as the other suffrage groups, will have some exhausting – but hopefully rewarding – days coming up!