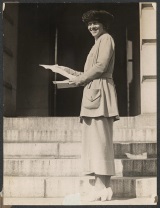 Catherine Flanagan of Hartford, Conn., was a state and national organizer for the National Woman’s Party. She was formerly secretary for the Conn. Woman Suffrage Association (CWSA). Her father came to the United States as a political exile because of his efforts in the movement for Irish freedom. She decided to travel to Washington on her vacation and participated in the picketing at the White House in August of 1917. During the second week, the women were attacked by the crowd and their banners were taken from them and torn apart. The women refused to disperse, were arrested for disrupting traffic and sentenced to 30 days at the Occoquan Workhouse in Lorton, Va.

While members of the Conn. Woman Suffrage Association condemned Flanagan for the picketing, CWSA member Mrs.Thomas N. Hepburn (mother of actress Katherine Hepburn) defended them. “I admire Miss Flanagan very much for being willing to go to jail for her convictions, “ said Hepburn. “It is more than most people could even conceive of doing for an ideal…If she prefers to spend her vacation working to make our own country safe for democracy…it behooves those who are less public spirited to try to comprehend her unselfish devotion.” Mrs. M. Tuscan Bennett, treasurer of the CWSA, told the Hartford Courant the same day, “We are indeed in a sad state of affairs in this country when the government uses its strong arm to protest disorderly mobs in their cowardly assault upon American women who are still fighting after 50 years for a principle which was held to be a self-evident truth nearly a century and a half ago: namely that governments derive their just powers from the consent of the governed.”

Flanagan, after arriving back in Connecticut, commented to reporters, “I am perfectly willing to go back to the picket line. I feel that it is a little thing to do toward the accomplishment of such a great purpose, especially since it seems to be the only thing left for us to do now.” She was so revered by her fellow suffragists that when Connecticut ratified the 19th Amendment, she was asked to present the historic document to the U-S Secretary of State, Bainbridge Colby.

Rampant women: Suffragists and the right of assembly by Linda Lumsden.

Votes and More for Woman: Suffrage and After in Connecticut by Carole Nicho Collection.