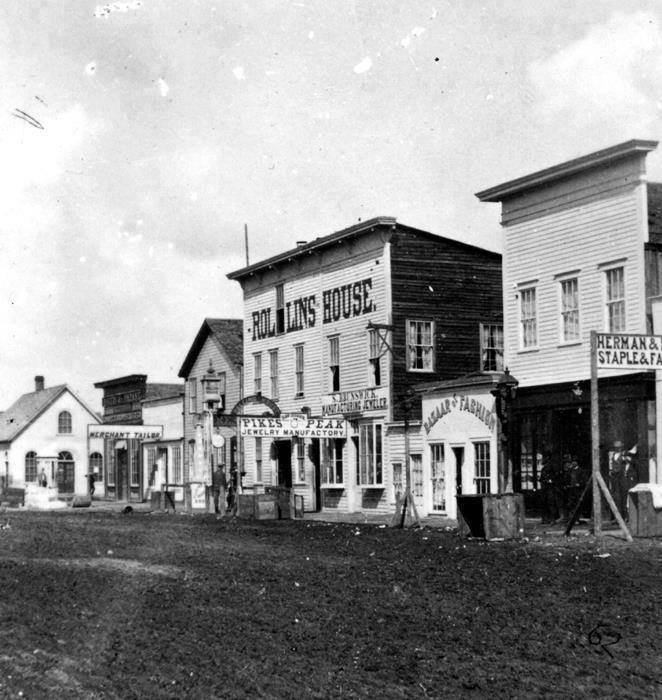 PHOTO: The Rollins House in Cheyenne, where the Wyoming Territorial Legislature meets. It recently approved not only woman suffrage, but equal pay for male and female teachers, as well as property rights for married women.

December 10, 1869: Woman suffrage has returned to America! For the first time since 1807, when the New Jersey Legislature disenfranchised that State’s women voters, there is now a part of the United States where a woman can legally cast a ballot: The Territory of Wyoming!

Wyoming Territory was established by Congress on July 25th of last year from land that was formerly part of Dakota, Utah, and Idaho Territories, and it has now given the suffrage movement the first of what will certainly be many more victories.

The suffrage bill was introduced into the Territorial Legislature by William H. Bright, a South Pass saloon owner, whose wife, Julia, is an enthusiastic suffragist. The measure was approved by the Council (equivalent to the Senate) 6-2. The House passed it 7-4 with one abstention. Following passage by the all-Democratic legislature, Republican Governor John A. Campbell signed the bill today, after women had held a vigil outside his office until he did so. This unique and landmark legislation reads:

“A BILL TO GRANT THE WOMEN OF WYOMING TERRITORY THE RIGHT OF SUFFRAGE, AND TO HOLD OFFICE.

“Be it enacted by the Council and House of Representatives of the Territory of Wyoming:

“SECTION 1: That every woman of the age of twenty-one years, residing in this territory, may, at every election to be holden under the laws thereof, cast her vote. And her rights to the elective franchise and to hold office shall be the same under the election laws of this territory, as those of electors.

“SECTION 2: This act shall take effect and be in force from and after its passage.

This is truly an exciting time to be a suffragist. Our movement has now completely revived from its temporary suspension during the War. National women’s rights conventions have resumed and been held annually since May 10, 1866. “The Revolution,” launched on January 8, 1868, by Elizabeth Cady Stanton, Susan B. Anthony and Parker Pillsbury, provides a lively nationwide forum for women’s rights supporters. On May 15th of this year, the National Woman Suffrage Association was formed in New York City, then on November 24th and 25th, men and women gathered in Cleveland, Ohio, to form the American Woman Suffrage Association. There is also serious consideration being given to using the 14th Amendment, ratified on July 9th of last year, as a way of winning nationwide woman suffrage through the courts.

Though the first attempt to win equal suffrage was defeated when the men of Kansas voted against it by a two-to-one margin in a referendum two years ago, today appears to be a turning point in the battle. The women of Wyoming Territory will soon begin going to the polls to cast votes, and it will become obvious that woman suffrage is no “threat to the family” as opponents claim, but rather a clear gain for society, as well as simple justice for the women of Wyoming, who will no longer suffer “taxation without representation” or be compelled to obey laws enacted by politicians who have nothing to fear on Election Day from voteless women.

Once women standing in line at polling places in Wyoming becomes a commonplace sight, and the Territory’s 9,000 residents begin to reap the benefits that women will bring to politics, woman suffrage should spread rapidly to neighboring Western Territories, then nationwide to all 37 States!