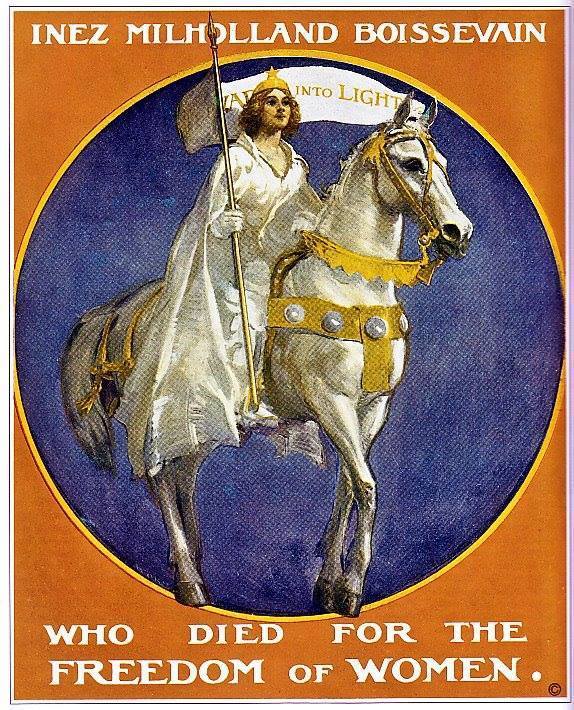 December 25, 1916: A colorful and moving tribute to Inez Milholland Boissevain today at Statuary Hall in the U.S. Capitol. It was totally fitting that her memorial would be in such a place, having given her life for the cause of political equality for women.

Despite health concerns that led doctors and family members to warn against a speaking tour, she kept a grueling pace for weeks throughout the Western suffrage States as Alice Paul’s “Congressional Union for Woman Suffrage” and “Woman’s Party of Western Voters” campaigned against Congressional Democrats, who control both House and Senate, for failing to use their power to pass the Susan B. Anthony (woman suffrage) Amendment.

Then in late October, Boissevain collapsed on stage in Los Angeles, never recovered, and died on November 25th, still only 30 years old. Her final words to the audience, “Mr. President, how long must women wait for liberty?” will be on Congressional Union and Woman’s Party banners until suffrage is won.

Despite today being Christmas, nearly 1,000 people came to pay tribute in the hall which was decorated with purple, white and gold banners. The ceremony began with a procession of women wearing purple, white and gold robes and holding tricolor banners, marching from the Congressional Library to the Capitol, passing through the Rotunda into the hall, then stationing themselves among the statues of American heroes. After the tributes were given, and in a move that Boissevain would have totally approved, a suffrage resolution was passed by those present calling upon President Wilson to “act so that by her death Inez Milholland Boissevain shall have delivered her countrywomen from the sacrifice of life.

“We ask that you open the great doors before which our women are exhausting their lives in waiting and appeal. Will you not let this nation by its example win yet another victory for liberty throughout the world? Those who are working in the cause for which Inez Milholland Boissevain died, who know the thousands of other women throughout the world bearing unflinchingly its sacrifices and labors and exhaustion, turn to the President of this democracy with the plea that he intercede to stop such waste of human life and effort; for by her death there has been made clear the constant, unnoticed tragedy of this prolonged effort for a freedom that is acknowledged just, but is still denied. There is no need in the United States to prolong this struggle of the women.”

Boissevan’s own words, included in the resolution, were perhaps the tribute she would have chosen: “It is women for women now, and shall be till the fight is won” and “Don’t dare to say you are free until all women are free.”