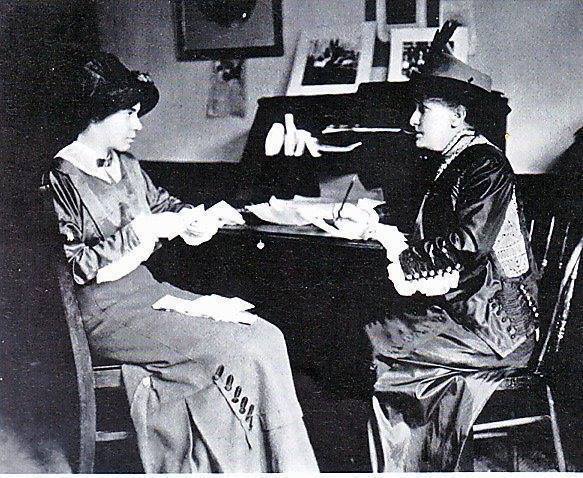 PHOTO: Helen H. Gardener, on the right, meeting with Alice Paul, head of N.A.W.S.A.’s Congressional Committee, as well as her own independent Congressional Union for Woman Suffrage.

December 3, 1913: From morning until night, an active, 12-hour workday for everyone here on the fifth day of the National American Woman Suffrage Association’s 45th annual convention. The first business of the day was actually conducted outside the convention hall, as many prominent and articulate advocates for our cause went to Capitol Hill at 10:30 to testify before the House Rules Committee in favor of establishing a Standing Committee on Woman Suffrage in the House.

Among today’s speakers were Reverend Anna Howard Shaw, Carrie Chapman Catt, Jane Addams, and Ida Husted Harper, with Alva Belmont, Inez Milholland, Mary Ware Dennett and Alice Paul in the audience. Each speaker gave an excellent presentation showing why woman suffrage was now a movement of such national importance that it deserved its own permanent committee. According to Helen H. Gardener:

“For many years we have been sent before the Judiciary Committee once a year, if we so desired, to present our arguments for woman suffrage. We appear before it, year after year, one day for two hours, and that is the end of it. That committee is a very busy one. The President has notified it that it is to be still busier this session … But the woman suffrage question is pressing for immediate solution.”

Jane Addams was peppered with questions by a House member from Georgia who believed that “altering the electorate” was not a proper subject for discussion in Congress. Addams then proceeded to give him ten examples of when Congress had done exactly that.

A suggestion that “Woman Suffrage” be tacked on to the end of the name of the Committee on the Election of the President, Vice President and Representatives, was rejected by Reverend Shaw as well as the National American Woman Suffrage Association’s National Board. It is believed that the proposal for a new and separate committee which will deal only with woman suffrage now has majority support, and speculation that it might be established, then stacked with anti-suffragists is being discounted.

Still angry with President Wilson over his failure to mention woman suffrage in his message to Congress yesterday, Ruth Hanna McCormick made a motion that the convention demand an audience with the President to impress upon him the need for equal suffrage:

“Since the President omitted all mention of woman suffrage in his message of yesterday, and since he has announced that he will send several other messages to Congress outlining the measures which the Administration will support, I move that this convention wait upon the President in order to lay before him the importance of the suffrage question, and urge him to make it an Administration measure, and send immediately to Congress the recommendation that it proceed with this measure before any other. I also move that a committee of two be appointed to make the arrangements with the President.”

The motion was enthusiastically carried, then she and Madeline McDowell Breckenridge were appointed to make the necessary arrangements for the President to receive a delegation from the convention.