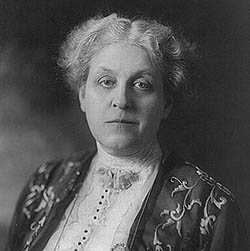 December 4, 1913: Unusually strong words on this, the sixth day of the National American Woman Suffrage Association’s convention in Washington, D.C. In a speech to the delegates, the usually tactful Carrie Chapman Catt, president of N.A.W.S.A. from 1900 to 1904, declared that women demanded the vote nationwide without delay, and ” … if the Constitution stands in our way, let’s tear it up and make a new one!”

Irritation with President Wilson, who neglected to even mention woman suffrage in his message to Congress day before yesterday, has increased. Today he failed to meet with convention representatives Ruth Hanna McCormick and Madeline McDowell Breckenridge, supposedly due to “illness.” As Connecticut suffragist Katharine Houghton Hepburn noted, if Wilson ” … had been brought up by an enfranchised mother, he would know more of the needs of democracy.” Hepburn later vigorously attacked the still-widespread practice of trafficking women for prostitution:

“Here in Washington at this very moment, girls are being bought and sold. The President knows it. The District Commissioners know it. The police know it. It is only the secret caucus of the House of Representatives which has prevented the Kenyon “Red Light Bill” from becoming law. I hope that the convention will adopt a resolution which will result in bringing this bill upon the floor of the House, having it debated and passed. It will in great measure prevent the traffic in vice which is being carried on openly and with official sanction in the National Capital.”

Reverend Anna Howard Shaw, N.A.W.S.A.’s president since 1904, was re-elected, with Jane Addams as First Vice President, an office she has held since 1911. These leaders have a tough job ahead of them, but have succeeded in revising the organization’s constitution to help fund more expansive – and expensive – efforts. After lengthy and vigorous discussions, the delegates mandated that each year all affiliated chapters must now send to N.A.W.S.A.’s national headquarters the equivalent of 5% of their annual expenditures, and representation in the national organization will now be proportional to the amount of money each chapter contributes to the national office, and not to the number of members it has.

Tension between the more militant members and those who are more conservative is clearly growing. As one example of the conflict, Alva Belmont tried to introduce a resolution to move the national headquarters from New York City to Washington D.C. This is where Alice Paul heads N.A.W.S.A.’s Congressional Committee as well as her own independent Congressional Union for Woman Suffrage. Both groups are concentrating solely on getting a Constitutional amendment banning sex discrimination in regard to voting rights passed by Congress and sent to the States for ratification. The militants also favor the use of more aggressive tactics to accomplish this goal. But Belmont’s attempt to move the national headquarters to D.C. failed, as most of the officers and delegates still appear to favor putting the primary focus on a more conservative “State-by-State” approach and using traditional methods of lobbying.

The growing split in N.A.W.S.A. could either hurt the cause through infighting, or help the cause if the militants leave N.A.W.S.A., and become free to pursue additional and new methods of achieving woman suffrage in all 48 States, the common goal of all suffragists. So next year is shaping up as a critical one for our “Votes for Women” movement.