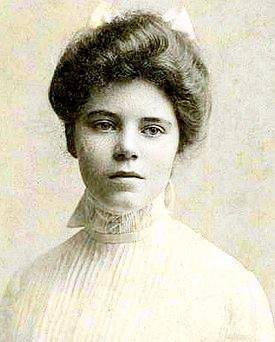 December 9, 1909: American suffragist Alice Paul has been freed from London’s Holloway Prison! Denied “political prisoner” status, she began a hunger strike immediately after her arrival, and was force-fed twice a day after 11 November. Though quite weak from her ordeal, she said today that she had no regrets, and would engage in such tactics again if necessary.

She was arrested on 9 November for taking part in a suffrage protest at the Lord Mayor’s Banquet in the Guild Hall. Disguising themselves as scrubwomen, she and another protester, Amelia Brown, snuck in many hours before the event began. They spent the morning hiding, one time coming so close to being caught that a constable’s cloak brushed up against Paul in a darkened area where she was crouching to avoid detection. As the time of the banquet approached, she began edging toward the gallery. Whenever she ran into someone, she would ask for directions to the kitchen. Eventually she made her way to the gallery, and when Prime Minister Asquith paused briefly during his speech, she and Brown shouted: “How about votes for women?”

Paul and Brown were quickly arrested, tried, and sentenced to 30 days at hard labour. Both immediately went on hunger strikes. Alice Paul did no work, and resisted everything the authorities tried to make her do, even refusing to wear prison clothes. Though not yet recovered sufficiently for a long interview, she did send out this statement today through a friend:

“I practiced a hunger strike until November 11th. After that date they fed me twice a day by force, except on one day when I was too ill to be touched. I have no complaints against the Holloway officials. I spent the whole time in bed because I refused to wear prison clothes. Each day I was wrapped in blankets and taken to another cell to be fed, the food being injected through my nostrils.

“During this operation the largest wardress in Holloway sat astride my knees, holding my shoulders down to keep me from bending forward. Two other wardresses sat on either side and held my arms. Then a towel was placed around my throat and one doctor from behind forced my head back, while another doctor put a tube in my nostril. When it reached my throat my head was pushed forward.

“Twice the tube came through my mouth and I got it between my teeth. My mouth was then pried open with an instrument. Sometimes they tied me to a chair with sheets. Once I managed to get my hands loose and snatched the tube, tearing it with my teeth. I also broke a jug, but I didn’t give in.”

Alice Paul originally came here to do further study, and gain more experience in social work, but became attracted to the militant wing of the suffrage movement through her acquaintance with Emmeline and Christabel Pankhurst. She joined the Women’s Social and Political Union, whose members proudly call themselves “suffragettes” to distinguish themselves from non-militant “suffragists,” and she has clearly been willing to share the risks of its militant activities.

Paul hasn’t said when she will return to the United States, but when she does, she could have quite an impact on the suffrage movement there. It is presently dominated by the National American Woman Suffrage Association, which endorses only traditional, non-militant methods of achieving the worthy goal of “Votes for Women.” At present, women have equal voting rights in only four of the forty-six States, the most recent win having been in Idaho on November 3, 1896.

But there are signs that at least some American suffragists are ready for bolder actions. On December 31, 1907, a group of “American Suffragettes” defied custom and propriety by holding the first of a series of weekly street corner meetings on Madison Square in New York City, daring to speak outdoors to crowds of men. Shortly thereafter, on February 16, 1908, their now-renamed “Progressive Woman Suffrage Union” held the first-ever “suffrage march” in the U.S., as two dozen women – despite being denied a parade permit – marched up Broadway, generating great controversy as well as some favourable publicity for the cause. So, it appears that if Alice Paul wants to bring a higher degree of militance to the U.S. suffrage movement, she may find many supporters who are ready for just such an escalation.