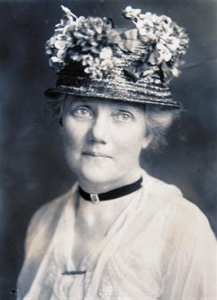 Dora Lewis
Photo courtesy of the Library of Congress

Dora Lewis was born in 1862 and was a member of a prominent Philadelphia family. While working with the National Woman’s Party she was among those suffragists who endured the “Night of Terror” in November of 1917, after being taken to the Occoquan Workhouse to serve a sentence for “obstructing the sidewalk.”

Lewis became involved in the suffrage movement as a wealthy widow from Philadelphia (Cooney, 185). She was one of the earliest supporters of Alice Paul and the National Woman’s Party but actually began working for the cause with the National American Woman Suffrage Association (NAWSA). Her first major project with NAWSA was working with Paul to increase the support for a federal women’s suffrage amendment (Cooney, 185). When Paul and Lucy Burns created the Congressional Union for Woman Suffrage in 1913 – which later became the National Woman’s Party (NWP) in 1916 — Lewis was one of the first women to become a member of the organization.

Incredibly active in the National Woman’s Party, Lewis served as a member of the National Woman’s Party executive committee, chairman of the finance committee, national treasurer, and ratification committee chairman. Lewis was also very active in picketing the White House on behalf of women’s suffrage and was often at odds with law enforcement. In November 1917, Lewis and other picketers stood before the White House gates, protesting the imprisonment of Alice Paul. In particular, the women were picketing against the denial of Paul’s status as a political prisoner (Irwin, 257) and were arrested. Lewis was tried on November 14th and sentenced to sixty days in the Occoquan Workhouse (Walton, 196). She and her fellow suffragists while in the Workhouse, fought to be treated as political prisoners.

From the evening of November 14th until the early hours of the morning on November 15th, the women endured what was later called the “Night of Terror.” Lewis and more than thirty other women were subjected to brutality at the hands of the prison guards (Walton, 199). They were kicked, dragged, choked and subjected to beatings. Lewis was thrown into a tiny cell and hit her head on an iron bed, knocking her unconscious and causing many of her comrades to believe she was dead (Cooney, 360). Despite their brutal treatment, Lewis and Lucy Burns led the other imprisoned women in a hunger strike (Walton, 200). A few days after their hunger strike began, Lewis and the other women were subjected to force feedings. Lewis explained that as they forced the feeding tube down her throat she was, “gasping and suffocating with the agony of it” and “everything turned black when the fluid began pouring in” (Irwin, 288). As the American public became aware of the treatment of the women, many people called for the release of the suffragists. On November 27th, less than ten days after their hunger strike began, Lewis and the other imprisoned suffragists were released (Walton, 206-207).

Lewis’ involvement in the NWP did not end with her imprisonment on the Night of Terror, despite the brutality she faced. She remained an active member of the NWP and was devoted to women’s suffrage. On August 6, 1918, she was the main speaker at a protest at Lafayette Square in Washington, D.C., that was held in memory of Inez Milholland, the iconic suffragist on horseback who led suffrage parades and who became ill and died while on a speaking tour to promote women’s suffrage. Lewis was beginning her speech when she was dragged away and arrested. Other suffragists quickly rose to take her place and they too were arrested (Irwin, 364). A year later, Lewis began the watch fire protests at the White House in which President Woodrow Wilson’s speeches were burned. She took part on New Year’s Day 1919 and was promptly arrested. (Irwin, 375). Lewis’ involvement in the fight for women’s suffrage continued as she traveled to various states considering ratification of the 19th Amendment. She was loyal to her cause and to the goals of the National Woman’s Party.