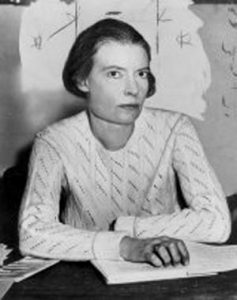 Dorothy Day
Photo Courtesy of the Library of Congress

Dorothy Day (1897 – 1980) was born in Brooklyn, NY, and lived in San Francisco with her parents until the 1906 earthquake, and then in Chicago. Her father was a Journalist, and she was an avid reader. She moved to New York City as a young adult. From NYC, she went to Washington DC to work with the National Woman’s Party on women’s right to vote.

She participated in the NWP group that protested the treatment of their leader Alice Paul, then imprisoned in DC. With the others, she was sent to prison in the Occoquan Workhouse on November 14, 1917, and experienced the “night of terror.”

On that night “. . . two men brought in Dorothy Day, –a very slight, delicate girl; her captors were twisting her arms above her head. Suddenly they lifted her, brought her body down twice over the back of an iron bench. One of the men called: ‘The damned Suffrager! . . . I will put you through hell!’” [Irwin]. Her arm was cut. [Stevens]

She became a famous leader as a pacifist, a social activist, and for her work to improve the lives of the poor. She wrote for The Call and The Masses, and co-founded The Catholic Worker.