A native of England, Edith Ainge was from Jamestown, New York.  She came to the US as a child and was brought up in a family of nine brothers and sisters.  Court records from her arrest for suffrage activity give her name as Mary E. Ainge. 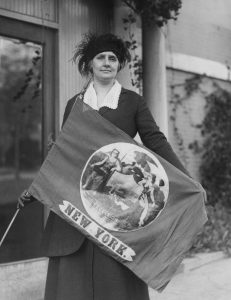 She came to DC as a suffrage activist having worked for suffrage in New York in 1915.  She joined the militant National Woman’s Party and a Silent Sentinel first arrested at the March of Draftees for World War I.  On the occasion of this parade on September 4, 1917, the NWP positioned themselves in pairs directly in front of the president’s reviewing stand.  Edith Ainge and Eleanor Calnan were the first, and opened a golden banner reading

“How Long Must Woman Be Denied a Voice in a Government Which is Conscripting Their Sons.”

The two were promptly arrested and then two more suffragists took their place and opened a new banner and so on until over a dozen suffragists ad been arrested.  Edith and the others were sentenced to 60 days at the Occoquan Workhouse in Lorton, Virginia for “Unlawful Assembly.”  While serving she was given solitary confinement according to court records.

She was also arrested and served time for her participation in the rally at Lafayette Square in 1918 at which the words of President Wilson were ceremoniously burned.  In early 1919 she participated in the similar “Watchfires for Freedom” and was arrested and imprisoned in DC on three separate occasions. She was arrested and incarcerated a total of 5 times.  In February and March of 1919 when the Senate vote continued to be stalled, the NWP quickly organized a train tour, called the “Prison Special,” to garner citizen pressure on key Senators.  Again Edith Ainge was a major player.  She spoke to street crowds to tell the story of how they were arrested and brutalized in prison for demanding that President Wilson take action to support the amendment for the woman’s vote.  She told how she lost 23 pounds in 6 weeks in prison.  She spoke along with Pauline Adams who also had been arrested at the Draftee Parade on Sept 4, 1917.  Congress finally passed the 19th amendment by the required two-thirds majority in each House in early June of 1919, and the ratification effort was underway in every state.

In May of 1920 when the 19th amendment was only one state short of ratification.  The chairman of the Delaware Republican party hosted a meeting at the Willard Hotel in Washington, DC to solicit funds for the Republican party from women there.  Members of the NWP disrupted his appeal by demanding to know what the Delaware Republican party planned to do about ratification.  Again Edith Ainge participated.  The general intent of the women was to send the message that women should know whether they would be voting before they should be asked to support a party.  Ultimately, Delaware rejected the amendment.

In the photo Miss Edith Ainge, also called “Aingy,” the first delegate to the convention of the National Woman’s Party to arrive at Woman’s Party headquarters in Washington, DC.  Miss Ainge is holding the New York state suffrage banner which would be carried by the 68 delegates from New York at the NWP convention meeting in Washington, DC on February 15th-18th (the year is believed to have been 1921 based on the date of the photo).

Photo courtesy of the Library of Congress.