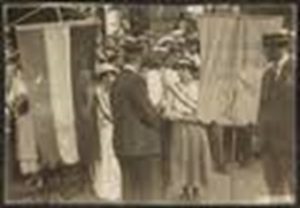 Edna Dixon was the daughter of a physician and public school teacher of Washington DC. She served the National Woman’s Party as a “Silent Sentinel” in 1917 at the age of 23. She was arrested for picketing the President Woodrow Wilson’s White House on August 17, 1917. At the court hearing the next day, with others she was found guilty of blocking traffic and fined $10 or 30 days in the Government Workhouse, i.e., the DC. Prison at Lorton Va. She refused to pay the fine because to do so would be an admission of guilt. With others arrested that day, she served her sentence at Lorton.