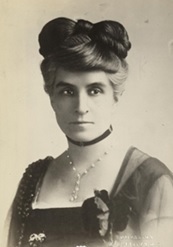 Eunice Brannan
Photo Courtesy of the Library of Congress

Eunice Dana Brannan was a prominent suffragist, being the daughter of Charles A. Dana, who was the founder and editor of the “New York Sun” and a trusted counselor of President Lincoln. She was also the wife of prominent physician Dr. John Winters Brannan, president of Board of Trustees of Bellvue Hospital. She was an advisor to Harriot Stanton Blatch, suffragist leader in New York, and later held prominent roles with the National Women’s Party including as a member of the Executive Committee and state chairman of the New York Branch. She gained attention for her brilliant state suffrage work as an officer of the Woman’s Political Union in NY. She was elected to the Executive Committee at the first National Convention of the Congressional Union in DC, on December 6-13, 1915. She was in the delegation of women who met with President Woodrow Wilson after the death of noted suffragist, Inez Milholland. It was President Wilson’s refusal at that meeting to act in support of an amendment allowing women’s suffrage that triggered the White House picketing. When the National Woman’s Party was formed and the Congressional Union for Women Suffrage dissolved in March of 1917, Brannan was elected to serve on the NWP board

Her first arrest for picketing the White House was on July 14, 1917, for which she was sentenced to 60 days in Occoquan. After three days she and the others were pardoned by President Wilson after one high ranking husband complained to the President. She also led the first group of 41 pickets that protested the treatment of Alice Paul on November 10, 1917. At their trial on November 12, 1917, Brannan said:

“The responsibility for an agitation like ours against injustice rests with those who deny justice, not those who demand it. Whatever may be the verdict of this Court, we shall continue our agitation until the grievance of American women is redressed.”

The judge responded by sentencing her to 60 days at the Occoquan Workhouse, making her among those who endured the “night of terror” at the DC prison in Lorton, Va. Again in late 1918, she was in attendance at the initial speech-burning demonstation at Lafayette Park and was the one who burned the President’s speech in which he ustified the women’s protests by saying:

“We have been told is the unpatriotic to criticise public action. If it is, there is a deep disgrace resting upon the origin of this nation. We have forgotten the history of our country if we have forgotten how to object, how to resist, how to agitate when it is necessary to readjust matters.”