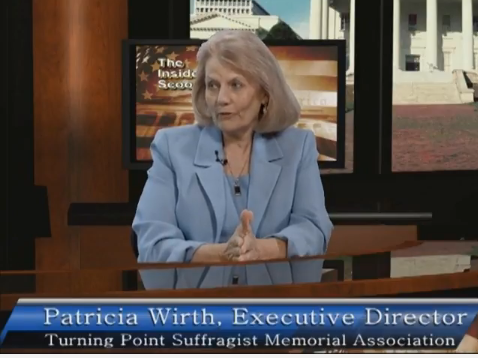 Catherine Read interviews Patricia Wirth, Executive Director of The Turning Point Suffragists Memorial Association. The goal of the organization is education of the public regarding the Suffragists Movement. The proposed memorial to be built in Occoquan Regional Park in Fairfax County Virginia, would serve as a monument to the 72 year struggle by over 5 million women in America to pass the 19th Amendment to the U.S. Constitution giving women the right to vote. It’s design also includes an education center to provide the historical context missing in the history lessons taught in classrooms around the country.

The first Women’s Rights Convention convened at Seneca Falls, New York, on July 19, 1848, is often cited as the beginning of the women’s suffrage movement in this country. The convention organizers, Lucretia Mott and Elizabeth Cady Stanton, were two abolitionists who met at the 1840 World Anti-Slavery Convention in London. Two hundred women attended this event and it would be the beginning of seven decades of struggle with millions of women working to get the right to vote for all women – current and future. An interesting account of this arc of history can be found in Adam Grant’s book “Originals” contained in the chapter “The Narcissism of Small Differences.”

Throughout this interview, Patricia Wirth shows slides of the women whose names are virtually unknown to most Americans despite their importance to this history of our country. Carrie Chapman Catt was the leader of the National Woman Suffrage Association and the founder in 1920 of the League of Women Voters, an organization that is thriving in 2017. Alice Paul was the co-founder of the National Women’s Party and she authored the Equal Rights Amendment to the U.S. Constitution in 1923. The ERA Amendment was passed in 1972 (five years before her death in 1977) but it has NEVER been ratified. In recent years it has come up annually for a ratification vote in the Virginia General Assembly where it is passed by the Senate and killed in the Republican controlled House.

The ratification of the 19th Amendment giving women the right to vote hinged on the votes of the Tennessee legislature in August of 1920. It came down to the vote of one single legislator, a young man named Harry Burn, who received a letter from his mother asking him to support Mrs. Catt and vote yes. Few people were ever taught this bit of history in school, and this is one of the missions of The Turning Point Suffragists Memorial, to educate. Through education and leadership development programs, we can build a monument not only to the people who sacrificed so much for women’s suffrage, but also as a reminder of what it takes to create substantive social change. As Rebbecca Solnit points out in her book Hope in the Dark, we must build monuments to the journey of how great change takes place.

The location of the memorial in Occoquan Regional Park in Virginia has historical significance. In 1917, the “Silent Sentinels” who had been peacefully protesting outside the White House for years, were rounded up by order of President Woodrow Wilson and imprisoned in the Occoquan Workhouse in Virginia. They were held without charge and brutalized there – beatings, force feedings and in deplorable conditions. It was the headlines of the international media that finally forced the administration to release the women. A documentary titled “Iron Jawed Angels” detailing the infamous “Night of Terror” that took place on Nov. 15, 1917, is available online.

The role of African American Suffragists will also be an integral part of this memorial to the suffrage movement.  The earliest suffragists came from the abolitionist movement well before the 1848 convention in Seneca Falls. The Women’s Suffrage Parade held in Washington, DC, in March of 1913 included 22 founders of Delta Sigma Theta Sorority. It was the only African American women’s organization to participate and they remain a stalwart supporter of building this memorial 114 years later.

A major capital fundraising effort is underway to raise the funds necessary to construct this $2 million dollar memorial with a deadline of February 2019. The goal is to allow 18 months to construct the memorial complex in time for the 100th anniversary of the ratification of the 19th Amendment in August of 2020. There is an urgent need to find major donors to underwrite the cost as this will be a privately funded memorial built on donated county park land.

This post was originally published on Read. Think. Act.