January 2015: Suffragist of the Month

January 2015: Suffragist of the Month 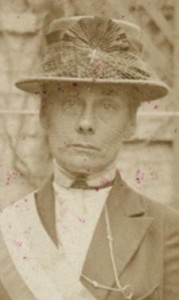 Cora Week was an artist from New York City.  She was engaged with the National Woman’s Party (NWP) at several key events.  She was among those who came to Alice Paul’s window at the DC Jail on November 9, 1917, to communicate with their leader who had been in jail for some time.  They promised her they would picket at the White House the next day to protest her treatment.

The next morning 41 women formed the picket line with tricolored banners marching in formation from NWP Headquarters to the White House in five groups.   Ms. Week was in the first group.  There was a thick stream of workers passing who paused to look at them.  Involuntarily they applauded when the women were arrested on-the-spot.  The suffragists heard one voice of encouragement call out, “Keep right on! You’ll make them give it to you!”

The police charged them with “obstructing traffic” and they were tried on November 12.  The police testimony was refuted by defense witnesses.  After eloquent testimony by the suffragists, Judge Mullowney admitted he was embarrassed by the Administration and dismissed the pickets without sentence saying he would take the matter under advisement.   An hour later, 27 of the 41 women, plus a few additional women were out picketing again.  Despite their surprise at such determination, police managed to arrest all of the pickets, 31 in all. They were ordered to appear in court on November 14.  These pickets endured the “Night of Terror” at the Occoquan Workhouse which included beatings and verbal abuse.  Cora Week was among them.

Cora Week was again on the scene when the National Woman’s Party organized watch fires on the sidewalk in front of the White House to burn the president’s speeches on democracy in Europe.  She was again arrested on February 9, 1919, and served time in the DC Jail in an area that was re-opened to house the suffragists.   The environment was cold and rat infested.