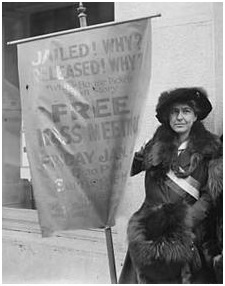 Julia Hurlbut of Morristown, New Jersey, became involved in the suffrage movement around 1915. Identifying with the radical wing of the movement, she served as Vice President of the New Jersey branch of the Congressional Union for Woman’s Suffrage and as a delegate to the National Congressional Union Conference. In 1916, she was one of the envoys that went to the suffrage states in the west to call for a meeting in Chicago in June to form the National Woman’s Party (NWP).

In 1917, she participated in the NWP’s picketing of the White House. On July 14, the anniversary of the fall of the Bastille in the French Resolution and fearing for their ill leader Alice Paul’s life as she left for a Philadelphia hospital, the NWP activists made sure that Alice Paul’s plans were fulfilled and sent three contingents of demonstrators to the White House. One banner was inscribed with the French national motto: LIBERTY, EQUALITY, FRATERNITY, another was the NWP tricolor banner. Julia Hurlbut was in the first group led by Mrs. J. A. H. Hopkins (Allison Turnbull) also from Morristown, New Jersey. A large crowd had gathered, and the first group took up their position at the upper gate. There were no arrests. The second group led by Amelia Walker emerged from NWP headquarters and took up their position at the lower gate of the White House. The instant the two groups were established, the police arrested them. The third group led by Mrs. John Winters Brannan took up their position and after four minutes were arrested for “violating an ordinance.” At the police station they were charged with “unlawful assembly.”

In court on July 17, Judge Mullowney sentenced the 16 women to 60 days in the Occoquan Workhouse on the charge of “obstructing traffic.” This group of suffragists was pardoned by President Wilson after serving three days. His action may have resulted from visits to the President by husbands who saw their wives in prison. One was the husband of Mrs. J.A. H. Hopkins, who had been a member of the Democratic National Campaign Committee in 1916.

After the arrest and brief imprisonment, Julia Hurlbut spent several months speaking in New Jersey on behalf of woman suffrage. She also served her country during World War 1.