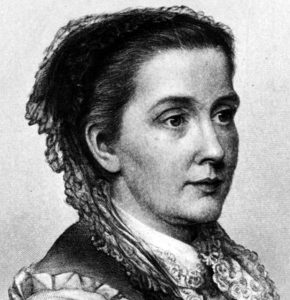 Born into wealth and privilege in New York City in 1819, Julia Ward was a self-educated woman whose modern (considered by some to be radical) ideas clashed with those of her puritanical Calvinist father, Samuel Ward.  Although restrained by her father, her status as a wealthy heiress gave her access to leading authors and philosophers. When Samuel Ward died in 1839, Julia and her two sisters moved in with their brother Sam, who introduced her to intellectuals such as Longfellow and Dickens. Sam’s marriage to Emily Astor, grandchild of John Jacob Astor, gave her additional access to New York society, prior to the death of Emily and her newborn son in 1841.

Two years later, Julia met and married Samuel Gridley Howe, a scholar 20 years her senior who was famous for his work on the Greek Revolution, his reform work for prisoners, and his efforts in educating the blind. Julia lived with Samuel in Watertown, Massachusetts, in the isolated quarters of the Perkins School for the Blind, a famed institution whose students included Helen Keller and Anne Sullivan.

While completely engaged with his teaching and philanthropy, Samuel proved to be a controlling husband, challenging Julia’s drive for independence by taking charge of the income from her large estate and insisting she take on a traditional role of wife and mother. He also demanded her help with his newspaper, “The Commonwealth.” Samuel Howe was a prominent contributor to John Brown’s abolitionist revolt, and fled to Canada after Brown’s capture to avoid prosecution as a co-conspirator. Around the time of the couple’s separation in 1853, Julia defied her husband’s wishes to publish her first book of poetry, “Passion Flowers.”

Julia became  an ardent supporter of reform movements, including abolition, women’s rights, prison reform, and education, and developed close friendships with some of the Boston intellectual elite. When her poem, the “Battle Hymn of the Republic,” was published, she became one of the most famous women in America.

Julia was known for being a strong and active proponent of the women’s vote and eventually became a recognized leader of the women’s suffrage movement. When her husband died in 1876, she was left with little income, but in her first journal entry after his death wrote, “Start my new life today.”

Julia Ward Howe was the first woman elected to the Society of Arts and Letters. Long after her death in Portsmouth, Rhode Island in 1910, she continued to provoke thought with a novel exploring gender politics.  “The Hermaphrodite” was published for the first time in 2004.