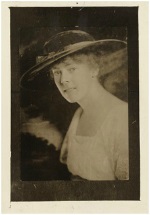 Katharine A. Morey of Brookline, Mass., was an officer of the Massachusetts State Branch of the NWP. She was the daughter of NWP organizer and state suffrage activist Agnes H. Morey. As state chairman, she was in charge of introducing the Woman’s Party Bill for Equal Rights. Katharine Morey worked as an organizer in the election campaign of 1916 in Kansas and frequently assisted at NWP national headquarters in Washington, D.C. She and Lucy Burns were the first suffragists to be arrested for picketing at the White House, and she served three days in June 1917. In February 1919 she was arrested again in Boston demonstration against President Woodrow Wilson and was sentenced to eight days in the Charles St. Jail.