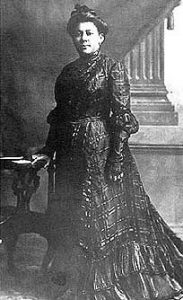 Organizer, writer, speaker and early supporter of a movement that would become the NAACP, Mary Morris Burnett was born in Oberlin, Ohio, to Cornelius and Caroline Nicholls Burnett. The only African-American woman in her graduating class at Oberlin College, she assumed a teaching position at Bethel University in the segregated school system in Little Rock, Arkansas, teaching history, mathematics, Latin, science and geography. She was appointed assistant principal of Bethel University, the only woman ever selected for that position.  She married William Herbert Talbert and soon after left her career and moved to Buffalo, New York.

Talbert came to wider attention at the turn of the 20thcentury, when she challenged the all-white board of the Pan-American Exposition in Buffalo, calling for the appointment of an African-American board member and an exhibit on the lives of African Americans. That year, she hosted Oberlin colleagues Mary Church Terrell, Anna Julia Cooper, and Hallie Q. Brown at her home as part of the NACW biennial conference.  She held several positions in the NACW, including serving as president from 1916 until 1920.

In 1905, W.E.B. Dubois, John Hope, Monroe Trotter, Frederick McGhee, C. E. Bentley, and 27 others met secretly in Talbert’s home to adopt the civil rights resolutions that led lead to the founding of the Niagara Movement, with a manifesto that Dubois saw as, “We want full manhood suffrage and we want it now…. We are men! We want to be treated as men. And we shall win.” Although Talbert was excluded from membership in the Movement, it served as the forerunner of the NAACP and she became a vice president and board member of that organization from 1919 until her death. She also was president of the National Association of Colored Women in 1916.

Talbert recognized the importance of using the media to unite around causes such as suffrage and to persuade African-American women to work for the vote.  In a 1915 article in the Crisis, Talbert wrote, ”It should not be necessary to struggle forever against popular prejudice, and with us as colored women, this struggle becomes two-fold, first because we are women and second because we are colored women.”

Talbert believed that race and gender were unifying factors to resolve class issues.  As the struggle for the vote neared its climactic final fights, African-American women’s associations and clubs appeared to put aside differences and focus on the goal–passage and ratification of the 19thAmendment.

Other noteworthy accomplishments included helping to save the Washington, D.C., home of Frederick Douglass and co-founding the International Council of Women of the Darker Races, dedicated to uniting women of color to fight oppression globally.

Rosalyn Terborg-Penn, African American Women in the Struggle for the Vote, 1850-1920(Bloomington, IN: Indiana University Press, 1998).