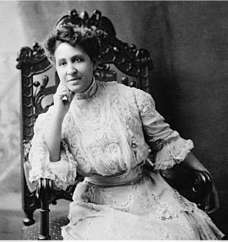 Terrell was a writer, educator, suffragist, and civil rights activist as well as a prime mover among Black women suffragists and clubwomen of the 20th century.  She was the daughter of a millionaire from Memphis, Tennessee, where her father Robert, a former slave, rose to become a wealthy landowner.   Educated at Oberlin College where she earned both an undergraduate and a Masters degree, Mary Church moved to the nation’s capital to teach at the famous M Street High School where she met and married the principal, Robert Church.  She became a leader of the Black community’s social and civic life, and the first African American woman appointed to the school board in the District of Columbia.  She was a member of the National American Woman Suffrage Association, adopting the mainstream feminist ideas and suffrage strategies.  When two major African American women’s clubs merged to become the National Association of Colored Women (NACW) in 1896, Terrell was elected its first president.  She founded the National Association of College Women which became the National Association of University Women.  She was widely published in both the Black and white press.

Terrell, in her recorded speeches in the NAWSA’s History of Woman Suffrage, reminded white women that to exclude Black women from voting because of race was like excluding white women because of gender.  In her speeches to the suffrage organization, she repeatedly defended against the charges of corruption among Black men, reminding white women of the racial barriers that kept many former slaves powerless.   Terrell was instrumental in building Black women’s clubs into a national movement for reform in the Black community, and the impact of the Black women’s club movement was politically significant.  In an article for the Crisis in 1915, she strategically compared the plight of Blacks and women.  Terrell accepted a number of invitations to speak before white groups, advocating the vote for Black women.

In the famous March, 1913 suffrage parade in Washington, D. C., organized by Alice Paul and the Congressional Union of the NAWSA, Terrell marched with the Delta Sigma Theta Sorority from Howard University, assembled in the area  reserved for Black women.  She continued to represent and speak for Black women at national woman suffrage conventions.  She served as director of work among Colored women in the east for the Republican National Committee after women won the vote.

Excerpted with permission from “African American Women Leaders in the Suffrage Movement” by Edith P. Mayo. Whose sources include:

Dr. Rosalyn Terborg-Penn’s information about their role and contributions to the suffrage movement in Notable American Women (Belknap Press of Harvard University)