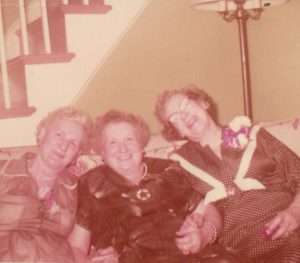 Although my little sister and I called her Aunt Mary, Mary Elizabeth Donegan was our great aunt, the sister of our grandmother. Mary was born on April 18, 1895 in Washington, D.C. She had four siblings who survived past infancy: two sisters (my grandmother, Ella Elizabeth and Aunt Jane “Jennie” Cecile) and two brothers, Joseph D. and William. Her parents, John Dominic Donegan and Mary Ellen Hurley were Irish and Catholic.

Among the five Donegan siblings, Mary was always considered the more serious and more politically and socially active. Mary had attended business college and became an executive secretary, and her last and longest position was with the International Brotherhood of Electrical Workers (IBEW).

I was fortunate that after her retirement, she lived with us for the last few years of her life. She joined our household when I was about age 7 and my younger sister Marlene was about 2.

I was a bit precocious and, even at a young age, a bookworm and follower of current events. Aunt Mary and I became quite close and the family teased that I was her little shadow. One of our special things was that she would take me to the downtown Woodward & Lothrop (“Woodies”). It was during lunches there, about once every month or two over two and half years, that she tried to impart her wisdom to me—mentoring me to follow her lead regarding activism and concern for the rights of all people. Like most kids, I did not listen quite as carefully as I should have. But I did enjoy her telling me about some of her experiences and her interest in my education.

I had heard the family chats about her protesting and picketing, but she spoke to me more to the importance of doing so to change harmful laws and to respect and honor all humans. I am not sure which she did first, but she did mention that from about age 17 to her early 20s when she became employed fulltime, she protested and picketed the British embassy for an Irish Free State, and she picketed “by the White House” for the woman’s right to vote.

She said she was fortunate not to be among those arrested, but she was friends of some who were, and she spoke about how awful it was for them. She conveyed her pride in being part of a protest that finally resulted in change—women could vote. And she later worked toward the right of D.C. residents to fully vote.

My mother later explained to me that her mother, my Grandmother Ella, was very worried that her sister would be harmed or arrested.  Aunt Mary had early onset diabetes and it could have been a serious concern, perhaps fatal. I do not recall Aunt Mary telling me of the potential danger, and I think that was to avoid worrying me because she was involved in working toward civil rights for African Americans. I had even been yelled at by a neighbor, using an unspeakable slur about my family.

My parents explained at the time that it had to do with Aunt Mary working for civil rights (this was a bit before she lived with us). Mary never boasted or sought any praise, she just plugged away at what was important to her, and it makes me very happy to be able to share her name with the world.

Aunt Mary never married and upon her death in 1969, we found she had left to my sister and me modest trust funds for our college educations. This was both surprising and yet not—as it fit her wishes for us to become the best we could be and carry on the work. It was a fitting gift in keeping with her very strong influence and inspiration.