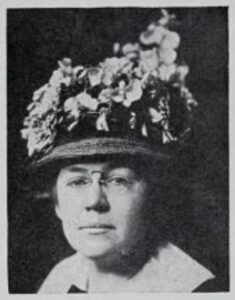 Mary Morris Hall Lockwood’s suffrage work in Virginia included founding the Alexandria County (now Arlington County) branch of the Equal Suffrage League in 1912.  The following year, she became active in the Congressional Union for Woman Suffrage (later the National Woman’s Party), serving as treasurer from 1913 to 1914 and organizing its local branch.   She participated in the 1913 suffrage parades in Washington, DC and New York City.  She organized events and marches in Virginia and Washington, DC, hosted fundraisers, and lobbied federal legislators.   In 1917 Lockwood was arrested for picketing the White House, but she, along with ten other picketers, successfully appealed her sentence and did not serve prison time.

After the 19th Amendment was ratified in 1920, Lockwood remained active in social reforms as a local and national woman’s club leader. In 1921, she was the Arlington County Republican Party’s nominee to the state legislature.

Mary Lockwood and her husband Henry Lockwood lived in a home in Arlington County from approximately 1904 until her death in 1936.  The site of that home (now Arlington Science Focus School) has been nominated to receive a roadside marker from the Votes for Women Trail project of the National Collaborative for Women’s History Sites.

Research was done by a professional researcher, at the request of Nancy Tate, as part of the 2020 Votes for Women Trail project on Virginia suffragists.