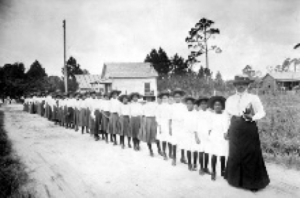 One of the 20th century’s most powerful and celebrated advocates for civil rights and suffrage was born in 1875 on a cotton farm near Mayesville, South Carolina. Mary Jane McLeod was the fifteenth of seventeen children of former slaves, Samuel and Patsy McIntosh McLeod. Driven by an early personal belief in the power of education, Bethune secured  scholarships to Scotia Seminary in North Carolina and Moody Bible Institute in Chicago, where she was the only African-American student.

Among her many pioneering educational strides, Bethune fulfilled a dream to open a school for African American girls in Florida in 1904. Under her formidable leadership and unswerving dedication, the Daytona Normal and Industrial Institute for Negro Girls grew from a bare house with makeshift cardboard-box desks serving five students into a 32-acre campus with 14 buildings and 400 students. In 1923, the school merged with Cookman Institute for Men of Jacksonville and became Bethune-Cookman College. Her home on campus is a National Historic Landmark.

Bethune turned her sights toward women’s suffrage in the early 1900s, when there was little role for African-American women, especially in the South. In 1912, she joined the Equal Suffrage League, an offshoot of the National Association of Colored Women. In an era when even African-American men couldn’t vote because of Jim Crow laws, Bethune watched as white-dominated voting rights and suffrage organizations marched and protested nationwide.

Following the 1920 passage of the 19th amendment, Bethune rode a bicycle door-to-door raising money to pay the “poll tax,” a tax imposed by white lawmakers to suppress black voting. Because a literacy test was also required, she conducted night classes to teach reading. When 80 members of the Ku Klux Klan threatened to burn her school, Bethune held an all-night school-front vigil with a groundskeeper and some of her students. The Klan backed down, and Bethune led a procession of 100 African Americans to the polls to vote for the first time in the Daytona mayoral election.

The story of her defiance of the KKK spread, and Bethune became a popular speaker for the rights of African Americans. Inspired by W.E.B. DuBois, she opened her school’s library to the public, providing the first free source of reading material for African Americans in Florida.

Determined to improve the lives and rights of African-American women, Bethune held prominent roles, including president, in the National Association of Colored Women (NACW). She also served as president of the Florida Federation of Colored Women’s Clubs, where she fought against school segregation and sought healthcare for black children. Under her leadership, the National Council of Negro Women (NCNW) was founded as a unifying voice for African American women’s organizations.

Along with serving as the NCNW’s first president, Bethune was also appointed to leadership roles in the administrations of Presidents Calvin Coolidge and Herbert Hoover. After forging a close and longstanding friendship with Eleanor Roosevelt, the “First Lady of the Struggle” arrived in Washington as President Franklin Roosevelt’s special advisor on minority affairs from 1935 to 1944 and shared her home, known as Council House, with the NCNW.

From 1936 to 1944 she held the position of director of the Division of Negro Affairs of the National Youth Administration, making her the first African-American woman to become a federal agency head, and part of FDR’s “Black Cabinet.” During World War II, she used her capacity as special assistant to the secretary of war and assistant director of the Women’s Army Corps to lobby for the admission of African American women into the military.

Bethune was the first woman and the first African American to be honored with a statue in a public park in Washington. The monument created by Robert Berks shows Bethune metaphorically handing her legacy to two children and is inscribed: 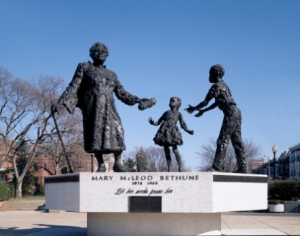 Photo courtesy of the Library of Congress

South Carolina honored its native daughter by hanging her portrait in the state capitol in Columbia. Like her former home on the campus of Bethune-Cookman College, Bethune’s home in Washington, the Council House, is maintained by the National Park Service as an historic site.  Nearly two decades after her death in 1955, Dr. Mary McLeod Bethune was inducted into the National Women’s Hall of Fame in 1973.