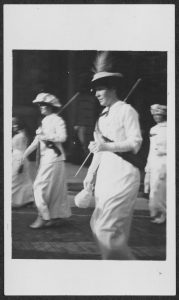 Matilda Hall Gardner, of Washington, D.C., formerly of Chicago, was the daughter of Frederick Hall, editor of the Chicago Tribune, and wife of Gilson Gardner, Washington representative of Scripps newspapers. Educated in Chicago, Paris, and Brussels, Gardner was one of the original core of activists who worked with Alice Paul and Lucy Burns when they first came to Washington to work for the Congressional Committee. She was a member of the national executive committee of the NWP beginning in 1914. She was arrested July 14, 1917, and sentenced to 60 days in Occoquan Workhouse; and Jan. 13, 1919, and sentenced to 5 days in District Jail. She said of her first arrest that an officer came up to her and politely said, “It is a beautiful day.” She concurred. They carried on a conversation and after looking up and down the avenue the officer finally said, “I think the patrol will be along presently.” Mrs. Gardner didn’t realize up until that point that she had been arrested.