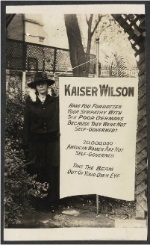 Miss Virginia Arnold, of North Carolina, was one of six pickets arrested in June of 1917 and was sentenced to three days in District jail after refusing to pay $25 fines for obstructing traffic. They were the first women to serve time for suffrage activities. Her sign scandalized many by comparing President Woodrow Wilson with the German ruler during the First World War. She was one of the organizers for the Congressional Union for Woman Suffrage, serving at one point as the National Executive Secretary. She was in charge of planning conventions and establishing state branches in Oregon, Idaho, Montana, Washington and North Dakota. Prior to engaging in suffrage work, she was a student at George Washington University and Columbia University.