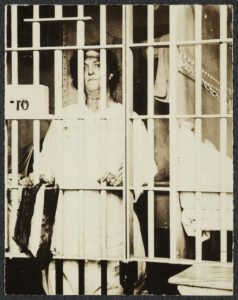 Mrs. Helena Hill Weed of Norwalk, Conn., was a graduate of Vassar College and Montana School of Mines. She became one of the first women geologists. She was also the daughter of Congressman Ebenezer Hill of Connecticut who served from 1895 to 1913. She was a founding member of the Women’s National Press Club and a vice-president of the Daughters of the American Revolution (DAR). She was a prominent member of the Congressional Union for Woman Suffrage and the NWP. She was one of the first pickets arrested, July 4, 1917, and served three days in District Jail for carrying a banner: “Governments derive their just powers from the consent of the governed.” In January 1918, she was arrested for applauding in court and sentenced to 24 hours, and in August 1918 she was arrested for participation in Lafayette Square meeting, and sentenced to 15 days. When she died in 1958 at the age of 83, TIME Magazine described her as a “kinetic suffragette who crisscrossed the nation crusading for the right to vote.”